Michael Wilner of the Jerusalem Post also tried to pin down Kirby as to what constitutes incitement and who is responsible for the increase in violence, to no avail.


Wilner pointed out that Ambassador Saperstein had just spoken at the State Department and “said to hold Israel to different standards than other – any other country isn’t just inappropriate; it’s anti-Semitism. What would you have – in terms of these checkpoints, what would you have Israel do?”

Kirby evaded the anti-Semitism point – which was a good one – and said the State Dept. is not going to dictate immediate security requirements onto Israel, which has the right and obligation to protect its citizens. He did, however, say that the U.S. is concerned by some reports of “what many would consider the excessive use of force.”

And then Kirby masterfully steered back on course, saying that what the State Dept. wants so see is “for both sides to take – to take the leadership responsibilities of calling for calm, maintaining that calm, and being able to restore a sense of normalcy so that people can get on with their lives safely and not have to worry, but also so that we can really begin to have again a meaningful discussion towards a two-state solution – which we continue to believe is the outcome that is – that’s best for the people there in the region.”

Terror, shmerror. The U.S. only cares about the Two State Holy Grail. 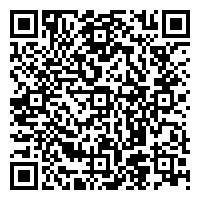