Vandals spray-painted a swastika on a statue outside an Olympia, Washington synagogue, and an anti-Semite punched an Orthodox Jewish student in the face in two high-profile hate attacks in the United States this week.

The college student was treated on the scene, with the help of a Muslim woman student. The attacker fled.

The statue in Washington stands outside Olympia’s Temple Beth HaTfiloh.

A swastika is not mere vandalism — it is a symbol of hatred with deep resonance with Jews and shakes us to our core, especially in a community in which we are constantly reminded of our minority status.

The incident at Brooklyn’s Medgar Evers College occurred when an unidentified black man bumped into an Orthodox Jewish student from behind. When the student turned around, the attacker punched him twice in the face and stomach while snarling at him for being “white and Jewish.”

College President Rudy Crew seemed to be thrilled at the chance to be politically correct and boast how a Muslim helped an Orthodox Jew.

The fact that a Muslim woman came to the defense of an orthodox Jewish man is a true reflection of the values that permeate this great institution.

Is it really such a tremendous event in the United States when a Muslim helps a Jew? 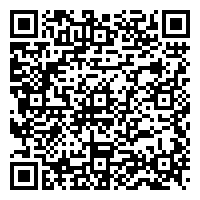