Israel’s security establishment continues to look for solutions to the situation in the Gaza Strip, as security sources on Monday warned about an approaching complete economic collapse in the Gaza Strip, Israel Radio reported. Those sources pointed out that preventing a humanitarian disaster in Gaza is an urgent matter of national security for Israel.

The political-security cabinet met Sunday to discuss the Gaza crisis and IDF Chief of Staff Maj. Gen. Gadi Eizenkot presented the ministers with proposed solutions to the urgent humanitarian crisis.

Eizenkot stressed, however, that no long-term steps should be taken before the bodies of IDF soldiers and the living Israeli civilians held by Hamas are returned.

According to Israel Radio’s Carmela Menashe, one of the ministers who participated in the Sunday cabinet meeting told her that the discussion “did not advance or innovate anything.” The same minister added that “various initiatives are under way to help the situation in the Gaza Strip.” Another minister said that he left the discussion with a positive feeling.

As was to be expected, Transport and Intelligence Minister Yisrael Katz (Likud) on Monday morning repeated his proposal to build an island off the Gaza coast that would serve the residents of the Gaza Strip. He told Reshet Bet that “the political echelon is in an absurd situation. On the one hand, we fear a deterioration that would have serious repercussions. On the other hand, Abu Mazen (Mahmoud Abbas’s nom de guerre) is abandoning the residents of Gaza, the Egyptians are ignoring them, and only the Jews are sitting and discussing how to help the Gazan civilians who are controlled by Hamas.”

Prime Minister Benjamin Netanyahu told his ministers at the meeting that “as far as I am concerned, any initiative and any idea for discussion can be raised.” Construction and Housing Minister Yoav Galant (Kulanu) presented his initiative to establish a joint industrial zone with Gaza, and Energy Minister Yuval Steinitz suggested establishing a port for Gaza in Cyprus.

No one in the cabinet meeting, according to reports, referred to the camel in the room, namely the fact that Gaza’s economy is starved under the Israeli blockade and that Israel is unable to let go of the blockade as long as Gaza is ruled by war criminals hell bent on destroying Israel. One of these two components has to be moved in order for Gaza to recapture the prosperity it enjoyed before the Israeli unilateral withdrawal of 2005. Like the chairman of the board said, Something’s gotta give. 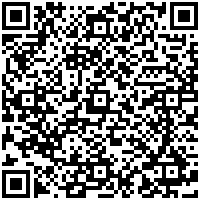