The IDF on Sunday released a recording made by an Air Force helicopter during the rescue of a Special Forces unit from the Gaza Strip, November 11, 2018.

In the recording, the pilot can be heard refusing to take off until all the soldiers are accounted for, despite heavy Hamas gunfire.

On Sunday, Lt. Col. M., 41, who was killed by friendly fire in the operation, was awarded a Chief of Staff Citation posthumously. In a private ceremony, his widow, children and parents accepted the award from IDF Chief of Staff Aviv Kochavi.

The IDF issued a clipped statement saying M. was “an example of outstanding bravery, courage, and sacrifice.”

Another soldier who was injured during the same IDF clandestine operation inside the Gaza Strip was also awarded the same citation.

Al-Qassam Brigades battalion commander Nour Baraka, 37, was killed together with six other Hamas terrorists, and seven Hamas men were wounded in the operation. 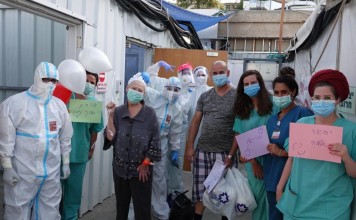