PM Benjamin Netanyahu on Monday met with the families of IDF Soldiers Lieutenant Hadar Goldin and Sergeant Oron Shaul, whose bodies have been held by Hamas in the Gaza Strip since the 2014 Operation Protective Edge.

Netanyahu issued a statement at the end of the meeting saying the families had been updated regarding the efforts to retrieve their sons’ bodies and other recent developments, and suggested additional steps which the PM instructed his team to examine.

Netanyahu told Leah and Simcha Goldin that he had instructed all the entities involved in returning the bodies of the terrorists to Gaza that Israel would not return additional bodies to Gaza until the soldiers are returned.

In early September, the Supreme Court ruled in an expanded, seven-judge panel, that the IDF can hold terrorists’ bodies and order their temporary burial for the purpose of negotiations with terrorist organizations. In doing so, the court reversed the previous decision of the High Court of Justice two years ago which did not give the IDF this authority. The ruling states that “striving to retrieve dead and alive IDF soldiers and Israeli citizens held by terrorist organizations constitutes part of defending the country. Therefore, it has been ruled that the IDF has the authority to order the temporary burial of terrorists’ bodies for negotiations with terrorist organizations.”

Shortly after Netanyahu’s meeting with the Goldin and Shaul families, the Mengistu family, whose son Avraham (Avera) is in Hamas captivity, released a statement to the media saying: “The Prime Minister abruptly canceled a meeting with us. He would not dare to do this to Goldin and Shaul (The Mengistus are Israeli Ethiopians – DI).”

The Goldin family said after the meeting that “As part of the meeting, a discussion was held regarding the agreements with Hamas in Gaza, and the prime minister reiterated his remarks from a year ago and promised that there would be no settlement with Gaza without the soldiers’ return.”

As to the Hamas terrorist’s body which was returned to Gaza two weeks ago, Netanyahu promised the parents that Israel would not return additional bodies to Gaza before their sons are returned.

Over the past two weeks, the Goldin family has protested, directly and through its legal advisers, the Israeli government’s decision to return the body of a Hamas terrorist to Gaza, as well as a living terrorist that was held in prison after his armed incursion into Israeli territory. The family noted that after the return of the body and the living terrorist, Hamas held victory parades in Gaza.

We’ll keep you posted the next time Israel returns a terrorist to Gaza – or not. 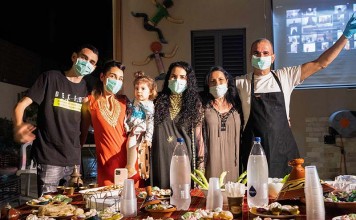