Mati Tuchfeld noted in Israel Hayom Thursday morning that Netanyahu is frustrated by his coalition partners in Blue&White, who are doing everything they can to torpedo his plan to declare sovereignty over some 30% of Judea and Samaria on or about Wednesday, July 1. Netanyahu was going to spend next week promoting his sovereignty program – which does not require by law the Knesset’s approval. All it takes is a government decision. But how can you get your government to decide when so many Blue&White ministers are running from one radio and television show to another, warning against it?

According to Tuchfeld, Netanyahu recently handed Ambassador David Friedman several alternatives to the proposed US maps, and none of them resembles the concept map released by the United States a few months ago. If he gets a green light for one for one of his alternatives, Netanyahu will charge the hilltop of sovereignty like Teddy Roosevelt’s Rough Riders on steroids.

It’s obvious why Bibi is so eager to win the sovereignty battle: he is in the winter of his political career, he has served longer than any other prime minister in Israel’s history, and yet there’s nothing remarkable next to his name in the historic record. Ben Gurion founded the state, Begin made peace with Egypt, Rabin recognized the PLO – but Bibi, other than handing over Hebron to Yasser Arafat in 1998, hasn’t done much besides conducting a stubborn, decade-long campaign to push back American policy on Iran and the Peace Process. In one, two or three years, when he steps down, Bibi wants to be remembered for something of substance. Being the prime minister who, in effect, annexed (most of) the Jewish settlements would be pretty substantial.

In closed talks this week, the prime minister said he had no intention of waiting any longer for Blue&White to endorse his plan. Even if every one of their ministers votes against it, Netanyahu would get it through with the vote of Minister Yoaz Handel, who would provide the winning vote for the rightwing bloc in the government.

Finally, according to Tuchfeld, Netanyahu has told people in his circle that should Blue&White succeed in shooting down his sovereignty move, he would not hesitate to go to new elections over this. The new Alternate Prime Minister Law gives Netanyahu the right to dissolve the Knesset in the first six months since the establishment of his government without having to transfer power to Gantz. He has five months from now.

The thing is, the people who would supposedly benefit from being annexed into “normal” Israel, the settlers, aren’t excited. Not because they think sovereignty is a bad idea, but because it comes with an Israeli commitment to the United States to support the establishment of a Palestinian State in the remaining 70% of Judea and Samaria, which include about half of Area C, currently under full Israeli control.

Chairman of the Yesha Council and Head of the Jordan Valley Regional Council, David Elhayani, started World War 3 between the settlers and the PM when he told Haaretz earlier this month: “Trump and Kushner have shown in the peace plan that they are not friends of the State of Israel and do not think about the security and settlement interests of the State of Israel.” He also said, “All they care about is promoting their interest in the upcoming elections to favor Trump.”

Samaria Regional Council head Yossi Dagan attacked Netanyahu, saying that the prime minister “is not doing us a favor by applying sovereignty.” According to Dagan, “the last three election campaigns were three referendums on sovereignty and there was a large majority supporting a clear statement: immediate sovereignty over Judea and Samaria.”

That’s two out of the three heads of the settlement councils in Judea and Samaria, neither one of whom is buying Bibi’s promises.

Ambassador R. Nicholas Burns, Under Secretary of State for Political, a GW Bush appointee, this week told Arena, a publication of the Abba Eban Institute for International Diplomacy at IDC Herzliya, that “Annexation would be a huge mistake.”

Burns believes the move “can be very damaging to US-Israel relations. Among many office holders who have served in recent administrations—Republicans and Democrats alike—there is an agreement that annexation, if the Israeli government chooses to implement it, would not only be an unwise move, but a huge mistake. Annexation would severely damage Israel in the international arena and also among its biggest supporters. It would fundamentally undermine a future two-state solution, which has been the United States’ official stance on the Arab-Israeli conflict since 1967.”

And so the opposition to Netanyahu’s sovereignty plan is comprised of people who hate it because it would usher in a Palestinian State and people who hate it because it would prevent a Palestinian State. Of course, Burns represents the traditional, State Dept. view, while Netanyahu is counting on a window of opportunity offered by an extremely unusual White House and a friendly Secretary of State, but Burns warns that “if the Israeli government takes any kind of step towards annexation – taking advantage of the fact that its close friend, President Trump, is still sitting in the oval office – I believe that the US political leadership, outside the administration, would almost certainly denounce it. No newspaper of substance, including the Wall Street Journal, would support such a move.”

As you can see, when Nicholas Burns was young, there used to be those printed things that came out every day and dictate to people in America what they should be thinking, which was enhanced later in the day by the three television networks’ news broadcasts. Television is just like your smartphone, but you have to watch it in the living room because it’s so heavy.

Should Netanyahu go ahead and succeed in adding almost half a million Israelis to their homeland (eat your hearty out, Nefesh B’Nefesh), it would erase the damaging effect of the recent High Court of Justice decision to revoke the Regulation Act: from that moment on, any Arab claimant to the land of a Jewish settlement would have to go to a real civil court and provide documented proof – something they could never do in past cases. And should said claimants win their case, the most they would get is fair market value for their land. Because in Israel, unlike some occupied territories under martial law, common sense still drives court actions. A lot of the times, anyway. 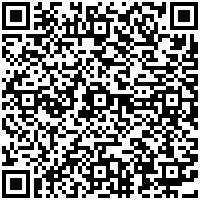