An Israeli public bus was attacked by Arab terrorists Wednesday evening as it traveled north of the outskirts of northern Jerusalem.

The #149 bus to Pisgat Ze’ev was struck by a hail of rocks as it traveled south through the village of Hizme. One particularly large stone smashed the central part of the windshield, right next to the driver’s area.


The driver and one passenger suffered minor wounds in the attack.

A number of other motor vehicles were also struck by rocks in the same area, close to central Hizme near the town of Anatot, according to security personnel in Judea and Samaria.

Earlier in the day there was a stoning attack in Samaria on the road between the community of Adam and the Arab village of Hizme, just north of Jerusalem. Terrorists were hurling rocks at Israeli security personnel at the time of the attack.

No injuries were reported in the incident and all personnel returned safely to base.

Arab terrorists hurled rocks at Israeli motorists at mid-afternoon on the road in Judea as well, damaging at least one vehicle near the town of Halhul, along Highway 60 south of Gush Etzion.

A number of vehicles were damaged. In addition to several Jewish motorists whose vehicles were struck, the windshield of a vehicle belonging to an Israeli Arab motorist was smashed as well.

Palestinian Authority Arab terror against Israelis is rising on the roads in Judea and Samaria in response to the increasing incitement by its Fatah-led government, both headed by Mahmoud Abbas, particularly over the past weeks in response to the U.S. recognition of Jerusalem as the capital of Israel.

Fatah has been continuing an attempt with Gaza’s ruling Hamas terrorist organization via a “reconciliation” to create a Palestinian Authority unity government. Hamas and its associated terrorist group, Palestinian Islamic Jihad, are both openly backed by Iran. 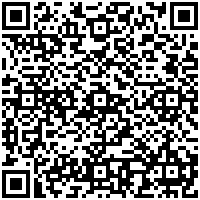