Quietly, the Palestinian Authority continues to take over the Israeli territories of Judea and Samaria. On Monday, a planting event was held in an orchard that had been uprooted by the IDF. Among the participants was the PA governor in the district, accompanied by an armed security man, without any coordination with the IDF.

The Trump plan has not yet been implemented, and neither has the declaration of Israeli sovereignty in Area C settlements, but in practice, the Palestinian Authority is increasingly taking over large areas of Judea and Samaria, including in Area C.


A delegation from the Palestinian Authority, together with Arabs from the Samaria area, participated on Monday in planting an orchard in the Ariel area. The orchard had been uprooted shortly before by the IDF. The orchard is part of Area C, which is under Israeli security and civilian control. The Palestinian Authority seeks to take over this territory, through agricultural and construction expansion.

According to reports in the Arab media, the Civil Administration and the IDF destroyed about 60 olive trees on the site. COGAT inspectors also issued a work stoppage order for a stadium which the PA plans to build on the site.

The planting event, after the orchard had been uprooted, was attended by Abdullah Kamil, Governor of Salfit District under the Palestinian Authority, and Walid Assaf, Minister of Fences and Settlements (it’s a thing, honest) in the PA.

They brought along an Arab security guard, armed with an M16 rifle. PA residents must seek an IDF permit to bring a weapon into Area C. However, an investigation by Hakol Hayehudi revealed that the Palestinian Authority had not forwarded a request to coordinate the presence of gunmen on the ground during the ceremony.

Coordinator of Government Activities in the Territories responded to Hakol Hayehudi’s inquiry saying that “in view of the Palestinian Authority’s decision to end security and civilian coordination with Israel – no coordination was made to permit the movement of armed Palestinians in the area mentioned in your inquiry.”

The PA has announced that a large event will be held on Wednesday to strengthen the Arab takeover of the area where the trees had been uprooted. 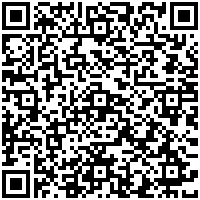