Despite the incessant accusations by Palestinian Authority leaders and their international supporters that Israel is running an “apartheid” state, its electoral process proves beyond the shadow of a doubt that its democracy is alive and kicking — in fact, it’s so alive, it’s become a hailstorm.

Anyone who has spent more than five minutes in an Israeli supermarket around Passover knows Israeli Arabs and Bedouin treasure matzah as much as any Jew in the country and they’re there to snap up holiday sales along with everyone else.


Likewise, despite the pleas of Palestinian Authority leaders, most educated Israeli Arab voters — today most of them are educated voters thanks to having grown up in a Jewish state that values quality education for everyone — did turn out to vote in the last Israeli national election.

On September 17, they’ll have to do it again, thanks to our “thriving” Israeli democracy. But statistics culled from the most recent Israeli election published April 14, 2019 by Israel’s Central Elections Committee show that even 27 percent those Israeli Arabs living in exclusively Arab towns and villages in the country chose to cast their ballots for Zionist parties.

Here’s how that broke down:

The actual number of Israeli Arabs who participated in the voting and who voted for Zionist parties is actually much higher, contend to Maurice Hirsch, Adv. and Itamar Marcus of the Palestinian Media Watch (PMW), which monitors and translates broadcasts, news and other items on Palestinian Authority media outlets.

Many Israeli Arabs live in mixed Jewish-Arab cities such as Haifa, Lod, Jerusalem, Ramle and elsewhere. “It is impossible to determine which parties these Israeli Arabs voted for because balloting is secret and Israeli Arabs in mixed cities use the same polling stations,” PMW points out.

But while the Palestinian Authority attempts to demonize Israel as as “racist” or “apartheid”, Israeli Arabs living democracy refute that message simply through their actions.

Israel’s Arab population has the right to vote and 50 percent chose to exercise that right including the 27 percent of those living in exclusively Arab cities who voted for Zionist parties.

In the most recent election, 10 Israeli Arabs were elected to Israel’s Parliament (Knesset) in exclusively Arab parties (receiving 350,000 votes) and an additional Israeli Druze were elected to the Knesset as part of the Zionist parties.

At the bottom line, if one really cares to look a little closer, an accusation of apartheid is more accurately applied to the denizens of the Muqata in Ramallah than anyone in the Knesset in Jerusalem.

Citizens of the Palestinian Authority live under a de facto dictatorship which has not held elections in 14 years. No election appears to be likely any time in the foreseeable future, either, at least until the death of PA leader Mahmoud Abbas.

Compare that with Israel’s thriving – if not sometimes stormy – democracy. 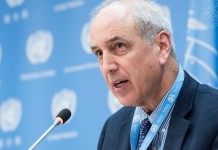