Supreme Court President Esther Hayut told an international conference on BDS that any public call for a cultural, academic or economic boycott of an individual or institution solely because of their connection to the State of Israel is a civil wrong that constitutes grounds for a tort claim, Makor Rishon reported.

More than 200 lawyers from Israel and the world gathered for three days of workshops and lectures at the first international conference of jurists against BDS, held this week in Jerusalem, to provide legal and professional tools for dealing with incitement, boycotts and delegitimization around the world against the State of Israel.


“Calling for a boycott is a means of coercion and not persuasion,” Hayut said at the conference. “It does not serve the basic principles of democracy, but instead undermines them by preventing a free exchange of ideas. As such, it is not worthy of the constitutional protection enjoyed by other forms of political expression.”

“The imposition of legal sanctions is proportionate when the state is interested in defending itself against a boycott of civilians,” the justice said, noting that “we emphasize that the boycott law only restricts the call for a boycott, not criticism of Israel. There’s a difference.”

Israel’s 2011 Law for Prevention of Damage to State of Israel through Boycott, a.k.a. the Boycott law, states that individuals or organizations who publicize a call for an economic, cultural or academic boycott against a person or entity merely because of its affiliation to the State of Israel and/or to an Israeli institute and/or to a specific region under Israeli control, may be sued civilly, in tort, by a party claiming that it might be damaged by such a boycott. The law also allows Israeli authorities to deny benefits from individuals or organizations – such as tax exemptions or participation in government contracts – if they have publicized a call to boycott and/or if they have obligated to participate in a boycott.

Frankfurt Mayor Eva Becker said at the conference that the words of Omar Barghouti, co-founder of the Boycott, Divestment and Sanctions movement, and of members of his BDS movement are “the same rhetoric used by the Nazis. This is a blatant anti-Semitic movement that fools European residents.”

The Nazi boycott of Jewish businesses in Germany was a state-managed campaign of ever-increasing harassment, arrests, systematic pillaging, forced transfer of ownership to Nazi Party activists, and ultimately murder of owners defined as “Jews.” On April 1, 1933, the Nazis carried out their first nationwide, planned action against Jews: a boycott targeting Jewish businesses and professionals, in response to the Jewish boycott of German goods. The SA stood menacingly in front of Jewish-owned department stores and retail establishments, and the offices of professionals such as doctors and lawyers. The Star of David was painted in yellow and black across thousands of doors and windows, with anti-Semitic slogans.

It should be noted that the original Nazi boycott was ignored by many individual Germans who continued to shop in Jewish-owned stores throughout that day.

“Last week, I decided that the Frankfurt municipality would no longer do business with banks that run BDS accounts,” she told the Jerusalem conference. “We are an economic capital in Europe and I hope that this step will lead other banks to follow our example.”

At the conclusion of the conference, the participants signed a joint statement on the establishment of an international legal network to combat the phenomenon of delegitimization and boycott initiatives against Israel. 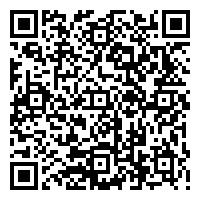