(JNS) Top Israeli and American officials arrived in Abu Dhabi, the capital of the United Arab Emirates, on Monday departing from Tel Aviv aboard an El Al Boeing 737 aircraft and in an unprecedented occurrence flying over Saudi Arabian airspace for the first-ever visit towards normalization between Israel and the UAE.

While much of the media’s reporting was justifiably focused on the substance of the meetings of what is being dubbed the “Abraham Accord,” a lot was going on behind the scenes to ensure the visit was a success.


One of the key role players in the two-day event was Rabbi Yissachar Krakowski, head of the Orthodox Union’s kosher department in Israel, and a trained mashgiach (kosher supervisor).

Krakowski arrived in the UAE a day before the meetings commenced and worked with a local caterer to ensure that all of the food served met kashrut requirements, as many of the attending participants adhere to strict kosher dietary laws.

Krakowski spoke to JNS from the UAE after dinner on Monday night, the second of three meals he was charged with overseeing—lunch and dinner on Monday, followed by breakfast on Tuesday, and said that he almost missed the event entirely.

“I flew from Tel Aviv to the UAE with a change of planes in Bulgaria, and was originally denied entry into Bulgaria as a result of the COVID-19 pandemic,” he said. “I had to call the chief rabbi of Bulgaria and the U.S. embassy, and with the airport authorities they worked out a solution, putting me in a border police car to transfer me from terminal to terminal so I could make my connecting flight without technically entering into Bulgaria.

“There was a lot of pressure” for a while, he acknowledged.

After successfully arriving in Abu Dhabi, Krakowski went straight to work at the St. Regis Hotel—the site of the meetings—with Elli Kriel, who runs Elli’s Kosher Kitchen, a catering company that offers food for events and business travelers who want to keep kosher while in the UAE. Kriel’s husband, Ross, serves as the president of the Jewish communities in the UAE. The country’s Royal Court reached out and asked her to cater the event.

Krakowski, who has been to the UAE twice before—both for the purpose of serving as a kosher supervisor and for other communal projects (which he said he couldn’t detail at this time)—estimates that 1,000 Jews live in the UAE. He said before the normalization, the Jewish community did a good job of laying low. “Until recently, the Jewish community was much more careful, but now they are more open as a result of the normalization.”

In addition to working in the UAE, in February of this year, Krakowski served as the kosher supervisor for a Conference of Presidents of Major American Jewish Organization’s mission to Saudi Arabia, another singular event.

Inside one of the kitchens at the St. Regis, Krakowski working alongside a local kosher supervisor and Khaled El-Shamzi, head of hospitality for the UAE’s Ministry of Presidential Affairs, started by kashering the ovens, stoves and countertops. This involves using a blow torch to clean the inside of the appliances and running it over surfaces at a high temperature to burn out any traces of previous non-kosher food.

He said that in some cases, items were dipped in boiling water for koshering purposes. At the same time, the rabbi said the UAE event staff was very accommodating providing new utensils for all meals.

Once the kitchen was ready, the catering team then prepared meals of different types of fresh grilled fish, vegetables, pareve chocolate desserts and other delicacies for the guests. Krakowski said that they even baked fresh kosher bread on the premises for the event.

For breakfast, the main staple was fresh omelets, along with pickled salmon, salads, cheeses, fruits, and hot and cold beverages.

In order to keep things orderly in the dining room, with some guests eating kosher with food coming out of one kitchen and others eating non-kosher from another kitchen, Krakowski placed a black card with the letter “K” on the plates of those observing kashrut so that it would be easily identifiable for the waiters, and there would be no mix-ups.

In total, Krakowski and the catering team prepared 300 kosher meals over the course of the two-day event, with 100 meals arranged for each respective dining experience.

Ironically, Krakowski said that when he first started working as the head of the OU’s kosher department 12 years ago, he insisted that he didn’t want to travel. While he acknowledged that he seldom does so, he said he remains fascinated by opportunities to work with the Jewish communities in the Persian Gulf on kosher certification, events and other projects.

He also said that he wasn’t stunned when Israel formally announced it was launching ties with the UAE. “I wasn’t taken by surprise at all. I saw it coming. Even before normalization of ties, ‘kosher’ started becoming of interest to them.”

He added that “the idea of accommodating kosher certification was a way for the Gulf nations to show they aren’t anti-Jewish or anti-Israel.”

Reflecting on his February trip to Saudi Arabia, Krakowski affirmed that “the Saudis are very impressed with Israel” and with Prime Minister Benjamin Netanyahu. “They think he is the best thing since sliced bread.”

He said he hopes to return to the UAE and other area countries for kashrut and communal opportunities within the Jewish community. “It’s hard to compete in the region because other organizations with lower [kosher] standards and who are cheaper are already here. But I felt it was very important to get involved in the region on behalf of the OU, in addition to the opportunities to work on the communal aspect.” 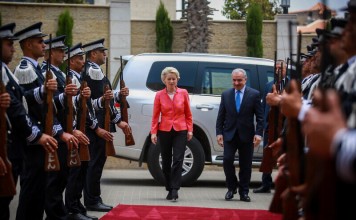