On a Saturday night, December 29, 2018, Habayit Hayehudi Chairman and Education Minister Naftali Bennett, and Justice Minister Ayelet Shaked announced the establishment of a new party, The New Right, jointly led by the two of them, and appealing to the secular and religious right-wing voters.

Bennett explained to reporters at a press conference in Tel Aviv—not Jerusalem—that Netanyahu’s contempt for religious Zionism had reached an intolerable peak. “Habayit Hayehudi has become a very influential force in the State of Israel, but in the past year, the era of our influence has come to an end. If in the past we prevented progress toward a Palestinian state and the release of terrorists – now, gradually, we’ve lost our power to influence.”


The split, which was reached, reportedly, with the agreement of Bennett’s and Shaked’s partner, Bezalel Smotrich, was meant to free both sides of the historic National Religious Party (Mafdal) to pursue their natural voters: Smotrich to court the more Haredi voters in the settlements and the traditionalist cities, and Bennett and Shaked to appear to the religious-light and even traditional-secular voters.

When they ran together in 2013 as Habayit Hayehudi, the brainchild of the late Uri Orbach, the legendary and very gifted strategist, those two parts of NRP equaled the old party’s best score ever – 12 seats. But there was as much enmity in that party as there was unity, which came to an explosive milestone when then Minister of Religious Service Naftali Bennett was pushing the nomination, in 2013, of Tzohar founder, Rabbi David Stav, possibly the most popular national-religious rabbi in Israel, to the post of Israel’s next chief rabbi.

Rabbi Stav ran an extensive campaign for two years at a cost of more than $1 million. He won the support of several religious-Zionist rabbis, including Rabbi Nahum Eliezer Rabinowitz, Rabbi Aharon Lichtenstein, and Rabbi Yaakov Madan. In addition to Habayit Hayehudi, Rabbi Yesh Atid, Yisrael Beiteinu, and the Tzipi Livni’s Movement, as well as many secular figures. But Haredi rabbis (most poignantly Rav Ovadia Yosef) and rabbis from the Haredi wing of religious Zionism opposed his candidacy, among them are Rabbi Simcha Kook, Rabbi Zvi Israel Tao, Rabbi Zalman Nehemiah Goldberg, and Rabbi Shlomo Aviner.

That profound defeat was part of an escalating inner conflict in the historic NRP, which resulted in a continued decline in the polls. But the split into the religious and religious-light only made matters worse, and as the country was swept into a whirlwind of perpetual elections and a deadly pandemic, both parts experienced very lean results at the polls, including the disappearance for one term of Bennett’s and Shaked’s New Right party.

But both parts have finally rediscovered their sea legs ahead of the March 23 24th Knesset election. Yamina indeed scored far below what the surveys had predicted, dropping from the promise of high double-digits to an expected 7, but 7 is such an improvement over its sad 3 seats in the 23rd Knesset. Yamina finally identified its niche – Modern Orthodox to traditional, right-wing Israelis; and Smotrich’s Religious Zionism has done equally well, growing from 2 to 5 or even 6 seats by targeting not only its natural religious-Zionist voters (hence the name) but taking a bite, it appears, out of both Shas and United Torah Judaism.

Should both new parties maintain their 13 combined seats, and perhaps even reach 14 (the IDF vote tends to lean to the right), this would be the very best NRP vote since the inception of the state. And if both parties enter a Netanyahu-led coalition government, they should be able to keep the boss honest—which is never a small feat.

Of course, both parties would not have done this well had the voter turnout been better – only about 67% bothered to vote this time, close to 5% fewer than last time. This meant a higher value to the small party votes since the cost of a single seat went down significantly. As a result, parties that were supposedly on the cusp of the vote threshold made out like gangbusters, including Mansur Abbas’s Raam, Meretz, Labor, and Blue&White.

Here’s the rub, though: Netanyahu will never agree to be the left-most component in his own coalition government. He has to have someone to his left to justify all those decisions that defy his promises to his right-wing voters: taking down the fake compound of Khan al Ahmar which separates Maale Adumim from Jerusalem; imposing a form of sovereignty on parts of Area C; even reforming the courts and the judicial system, even though they are out to put him behind bars.

To that end, Netanyahu is very likely to invite Benny Gantz, his abuse victim of the past year, to join his coalition government with his miraculously-won 8 seats. With Blue&White, the two Haredi parties, and Likud, Netanyahu will easily tame the historic NRP, including the freshly elected MK Itamar Ben-Gvir who’s been demanding positions of power in exchange for his support, but may not necessarily get anything. 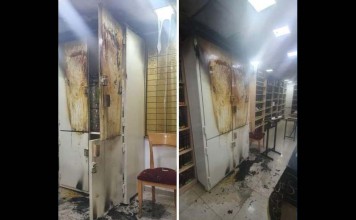