Israeli Defense Minister Benny Gantz and his American counterpart, Secretary of Defense Lloyd Austin are meeting on Thursday to discuss a military exercise to prepare for an attack that would destroy Iran’s nuclear facilities if negotiations fail to curb its efforts to develop a military nuclear device, Reuters reported, citing a senior US official.

In late November, Secretary Austin delivered a major policy speech on the Middle East and North Africa, which he opened with the statement: “The United States remains committed to preventing Iran from gaining a nuclear weapon. And we remain committed to a diplomatic outcome of the nuclear issue. But if Iran isn’t willing to engage seriously, then we will look at all the options necessary to keep the United States secure.”

The Israeli Air Force is currently preparing for an extensive exercise in which dozens of fighter jets will practice an attack on Iran, Kan 11 News reported on Wednesday. The large-scale exercise will take place this spring over the Mediterranean and Air Force planes will fly at ranges that simulate an attack in Iran.

Three months ago, IDF chief of staff, Major General Aviv Kochavi, announced that the IDF was accelerating plans to attack Iran. His statement translates into allocating budgets and training in preparation for an attack on Iran, which include flying to a distance of more than a thousand kilometers. The exercise will be visible, as part of the messages that Israel has been sending recently to the world and to Iran.

“We’re in this pickle because Iran’s nuclear program is advancing to a point beyond which it has any conventional rationale,” the high-level US official told Reuters.

According to the International Atomic Energy Agency (IAEA), Iran has begun to enrich uranium up to 20% purity with one group of 166 advanced IR-6 machines at its Fordow plant. According to Ali Akbar Salehi, head of the Atomic Energy Organization of Iran, who spoke on state TV last week, “Today, we are witnessing the launch of the cascade of 30 IR-6 centrifuges. Iran now is operating 60 IR-6 advanced centrifuges. It shows our capacity and determination.”

The US official told Reuters that on October 25, White House national security adviser Jake Sullivan was briefed by the Pentagon on the military options available to make sure Iran would never produce a nuclear weapon.

In his policy speech, Secretary Austin referred to the negotiations with Iran, saying, “We and our partners will return to those talks in good faith. But Iran’s actions in recent months have not been encouraging — especially because of the expansion of their nuclear program.”

“If Iran comes back with constructive positions, we still think we can quickly resolve our lingering differences to make a mutual return to the JCPOA possible,” he added.

Austin said the Defense Department is working with partners in the region to address threats from Iran, its proxies, and terrorist organizations. Those threats include unmanned aerial vehicles, boats loaded with explosives, and ballistic missiles. 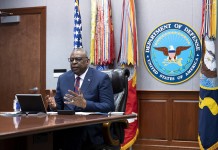 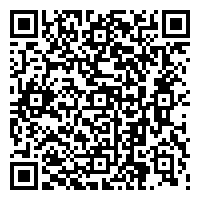