Arab MKs are critical of Prime Minister Benjamin Netanyahu for condemning violence in their communities.

In recent days, Arab towns in Israel have seen a surge in violence, which brought the total number of Arab-on-Arab murder victims since January 1 to 72. On Sunday, Netanyahu condemned “the acts of murder and violence in the Arab sector.”

Together with Public Security Minister Gilad Erdan and Police Acting Commissioner Motti Cohen, the PM decided to allocate additional forces and to increase enforcement in the Arab sector. He also called on the local Arab leadership to “act responsibly and cooperate with the authorities in order to bring about a substantive change in the situation.”

Netanyahu called on the Arab public to “refrain from violence of any kind in protest rallies” against violence. “All of us must act responsibly and cooperate in order to fight violence,” the PM said.

Chairman of the Joint Arab List Ayman Odeh said that “after days of silence in the face of murders and demonstrations throughout the country, Netanyahu finally remembered to issue a message in order to fulfill his obligation.”

Other Joint Arab List MKs have also rejected Netanyahu’s statements, calling on him to use fewer words and more action.

The police has attempted to boost its presence in Arab communities but is being met with resistance.

To fight violence, police have launched a special operation that seized some 4,000 weapons in the first half of 2019, 80% of which have been confiscated in the Arab society. Some 2,800 suspects have been arrested in shooting incidents in the same time period, of whom hundreds have been indicted.

The data show that Israeli Arabs—who comprise 21% of the population—are involved in 57% of all murders, 55% of attempted murders, 59% of arson, 45% of robberies, and 26% of drug offenses.

According to the Israel Prison Service, Arab inmates comprise 43% of all inmates in Israeli prisons. 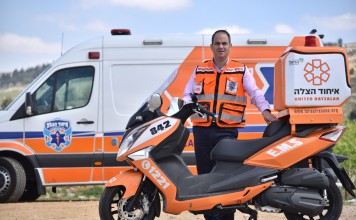