A book of Tehillim (Psalms) has been credited with helping to save the life of a 62-year-old man who was one of the victims of last Wednesday’s twin terrorist bombing attacks in Jerusalem.

The man, a resident of Jerusalem who has asked to remain nameless, was on his way to the northern Israeli town of Meron when the explosion sent nails and other destructive bits of shrapnel flying – hitting him and more than a dozen others nearby.

The man, who was seriously injured, told his doctors and visitors at Shaare Zedek Medical Center that the Book of Psalms he had in his pocket absorbed a potentially lethal piece of shrapnel that hit him when the bomb exploded, thus blocking it from entering his body.

The fragment tore through the pages of the sacred text, stopping at Chapter 124, Verse 7: “Our soul has escaped like a bird evading the grasp of its captors. The grasp is broken, and we have escaped.”

The bombs exploded at two separate bus stops bare minutes apart — one at the Givat Shaul entrance to Jerusalem near the Central Bus Station, and the other at a bus stop in Ramot on the main road leading to center of the city.

Sixteen-year-old yeshiva student Aryeh Shupack died immediately in the blast; three days later, critically injured 49-year-old Tedsa Tashume Ben Ma’ada succumbed to his wounds. Of the 18 remaining victims, nearly all were released from the hospitals in the days following the attacks.

Israel Police, Shin Bet intelligence agents and other security personnel are continuing to hunt for the attackers. 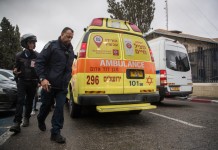