An Askaria Institute survey published on Wednesday predicts that 12% of Haredi sector voters do not intend to vote in the November 1 elections in 13 days. This unusually high percentage is about equal to one Knesset seat, and the fact that these Haredi folks don’t plan to bother to vote reflects their rage at the Haredi parties or their sense that these parties no longer care for their interests. Needless to say, this one mandate is exactly what Likud Chairman Benjamin Netanyahu needs to complete a narrow-majority, right-wing government.

According to the survey, 43% of Haredi respondents plan to vote for United Torah Judaism, a drop from the previous 47%, suggesting the Haredi party may lose its seventh mandate.

The survey also examined the reasons behind Haredi voting. It turns out 63% of Haredim vote according to the will of the gedolim (sages); 21% of the voters are anxious about the Jewish character of the state; 17% based on economic stress; 12% want to feel a sense of belonging to the Haredi sector; 8% out of their loyalty to Netanyahu and the right-wing bloc; a meager 7% over concern with security issues. Mind you, some Haredim vote for more than one of the above, which is why the numbers add up to 128%.

Still, according to the survey, the vast majority of Haredi voters are against their parties joining a left-wing coalition led by either Lapid or Gantz, even should Netanyahu’s right-wing bloc fail to reach 61 mandates. Only 8% favor joining the left-wing bloc in case of a draw. 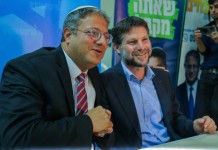 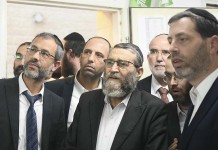