“Frankly, it’s hard to chase after the dozens of fake spins the Likud routinely puts out to journalists every day,” says a lengthy WhatsApp I received Wednesday evening from Bezalel Smotrich’s spokesman. “We generally believe that it is right to conduct negotiations in the room and not in the media. But the Likud, unfortunately, decided to schedule negotiation meetings with us barely once every three days, and in between to brief and spin to discredit and diminish us, and send legions of tweeters and “commentators” to lie and curse us in the most vulgar manner.”

The folks at Religious Zionism are not wrong. Netanyahu’s lackeys are everywhere nowadays, on radio talk shows, mainstream news channels, and even right-leaning television and YouTube channels. They are a permanent, unpleasant feature, listing their by-now-nauseatingly-familiar talking points:


1. Bezalel Smotrich is not qualified to serve as defense minister because he is not a retired IDF general. Of course, some of Israel’s better defense ministers weren’t generals, starting with David Ben Gurion and Levi Eshkol, through Moshe Arens, and they all did a fabulous job commanding the country’s security apparatus.
2. Smotrich was not a combat soldier. But then Avigdor Liberman, who served a stint as defense minister, was in charge of supplies as a soldier.
3. Ben Gvir didn’t even serve in the army. But, of course, it was the army that banned Ben Gvir over his politics, despite the campaign waged by his mother, an HR officer.
4. Smotrich is demanding top government appointments because of his huge ego. This one is being repeated by folks who work for a man who dragged the country to five elections to serve his personal needs. Again, nauseating.

Then, on Wednesday, the last honest man on Netanyahu’s team, MK Yariv Levin, joined the mudslinging gang and accused Smotrich of planning to take over the government from within by tearing down existing ministries. It was an infuriatingly unjust attack, by a man we all considered to be honest, and who, as Likud’s chief negotiator knows the reality is that Netanyahu has been trying to rip away whole sections of Smotrich’s and ben Gvir’s offices while reneging on every single promise he had made to them. And so, Smotrich et al have taken the warpath. This is what they sent out:

Let’s sort out the portfolios issue in response to some of the current spins:

And then, last night, he (Netanyahu) reneged on all the agreements.

So, who here wants to form a government and gives up and is being pragmatic, and who aims to trample, humiliate and diminish Religious Zionism?!

And to all those who are urging us to give up everything, reach closure at all costs and form a government immediately, keep in mind that we have four years to work. It’s a mistake to look at things through these few days. What’s being built correctly now will work well for four years; if we’re pushed today, we’ll regret our mistake for four years.

And to those who tell us to enter without defining anything and “everything will be fine,” we’re only asking – have things been fine for more than a decade?

We promised that this time it would be different and we insist that it will be so. In security, governance, settlement, reforming the justice system, and the Jewish identity of the state. This is why you worked so hard in this election campaign and why you went to the polls and voted for us. You sent us on a mission and we intend to fulfill it, with God’s help. We have a historic opportunity for change and we must not miss it.

We go with Netanyahu and the Likud and don’t believe that after the last two years we have to prove it. But we’re not giving them a blank check and we’re not walking in blindfolded. A coalition must be built on a partnership and agreements.

We are giving in and compromising a lot, but we have red lines that you don’t want us to give up either, and if we gave them up, you’d be angry with us for four years, and rightfully so.

So, trust us, and even if it takes a little more time (there are always negotiations and no government has been formed faster), believe us that it will be fine. We will not give in to dictates and slanders, we will not be pushed, and will not give in on the important things.

We are sorry for the wild and unbridled attack against us. This is another attempt to humiliate and trample on Religious Zionism and to disparage the ideology and values for which we were elected.

Without the tools for action, we will not be able to change what happened in the last decade in loss of governance, erosion of military deterrence, the justice system, and Jewish identity.

We have no interest in mutual skirmishes. It is time to form a right-wing government and restore security to the citizens of Israel. We will stand by our demands to ensure that those who chose right will get right.

Couldn’t say it more clearly myself. And as one of those Israeli voters who this time gave their vote to Smotrich and Ben Gvir, I say: Don’t give an inch, fight, because you are fighting for me. And if Bibi balks at the last minute and goes with Gantz––because that’s what he would have done anyway, had Gantz not refused––I am telling you with an open heart and clear eyes, it’s OK, I will vote for you again if you choose to return to the opposition rather than betray me and our values. In fact, my support would be even more vehement. 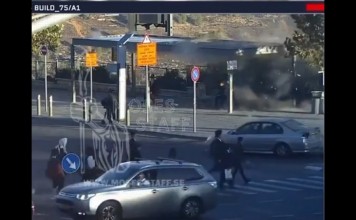