Early Thursday morning, a delegation of medical and psychological experts from the emergency medical service (EMS) organization United Hatzalah, departed from Israel en route to Puerto Rico. The team, which is comprised of four members of the Psychotrauma and Crisis Response Unit (PCRU) as well as two emergency medical technicians (EMTs), will be tasked with providing psychological and emotional stabilization as well as medical care to residents adversely affected by Hurricane Fiona and the resulting floods in various communities in the southern part of the Island.

Hurricane Fiona is currently an active Category 4 hurricane in the Atlantic, threatening Bermuda and Atlantic Canada. The sixth named storm, third hurricane, and first major hurricane of the 2022 Atlantic hurricane season, Fiona developed from a tropical wave that emerged from West Africa, before developing into a tropical depression east of the Leeward Islands on September 14. On September 16, it passed Guadeloupe as it entered the Caribbean Sea, and strengthened into a hurricane as it approached Puerto Rico two days later. A few hours afterward, the eye of Fiona made landfall along the southwestern coast of Puerto Rico near Punta Tocon, between the municipalities of Lajas and Cabo Rojo on September 18 at 19:20 UTC, according to the National Hurricane Center. The hurricane then proceeded to make landfall in the Dominican Republic shortly thereafter and then strengthened into the first major hurricane of the season. As the storm slowly moved through the Turks and Caicos, it continued to strengthen and reached Category 4 status the following day while accelerating north. After undergoing eyewall replacement cycles, Fiona reached peak winds of 130 mph and a minimum pressure of 936 hPa (27.64 inHg).


Puerto Rico saw the worst flooding since Hurricane Maria in 2017, resulting in an island-wide blackout. A third of the country’s population was left without water, and at least four people have died there. In the Dominican Republic and the Turks and Caicos, heavy rainfall and flooding pounded the countryside along with heavy winds.

“After contacting several community leaders in Puerto Rico and assessing needs based on their reports and other local sources, we decided to send a delegation to provide residents with emotional and psychological support and treat any medical issues that we find along the way,” said Vice President of Operations for United Hatzalah Dov Maisel. “Our Psychotrauma and Crisis Response Unit has a lot of expertise responding to disasters and we have seen that this aspect of treatment, focusing on mental health, is often overlooked in disaster areas.”

The specialized PCRU has responded to several major incidents around the world following large-scale and localized disasters. Some of the unit’s previous missions included responding to the Tree of Life Synagogue Shooting in Pittsburgh, Hurricanes Harvey and Irma, the Surfside Building Collapse, and most recently the war in Ukraine and the ensuing refugee crisis.

PCRU Director Avi Marcus explained, “Since the unit’s creation in 2016, we have taken the tools developed by leading psychologists and therapists dealing with the treatment and prevention of psychological trauma and acute stress reactions, and created a series of protocols and on-site treatments that can be used anywhere and at any time. Our goal is to help people regain a sense of control and build support networks together. By doing so, we alleviate the sensations of loneliness and helplessness––two leading causes of trauma-related stress. These are things that can debilitate even the most resilient individuals and our goal is to communicate to those affected by the storm and the ensuing floods that they are not alone, and can reassert control over their situations.”

“We have learned a lot about how to provide psychological first aid and emotional stabilization since the unit was founded,” added Maisel. “This knowledge comes from our experiences both abroad as part of international missions and here at home. In Israel, our teams regularly assist people who suffer from trauma after experiencing medical emergencies, as well as individuals who experience or witness terror attacks and missile strikes. We are now bringing this knowledge and experience to helping the people of Puerto Rico. We hope to work with those most affected by the fallout from the hurricane and we have one clear message: you are not alone. We stand with you and we are coming to help.”

There’s no end date set for the mission at the moment, but the Israeli volunteers have left their loved ones knowing they would be missing Rosh Hashanah at home, if not Yom Kippur, too.

Mission Commander and Director of International Emergency Management Gavy Friedson summed up the mission, saying, “We hope to not only treat people on the ground but also educate and train them in building resiliency in their communities and connect them with other services and networks, including international relief groups. As a partner of OLAM, a network of Jewish and Israeli organizations that work in developing countries, we hope to work closely with our partners and community leaders who are already active in Puerto Rico. This way, we hope our mission will be a force multiplier, enabling people to help others in their communities for many years to come.” 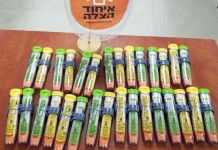 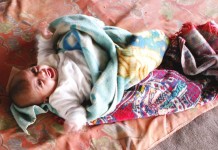 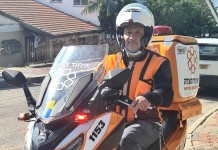 EMT Wrestles with the Angel of Death and Prevails 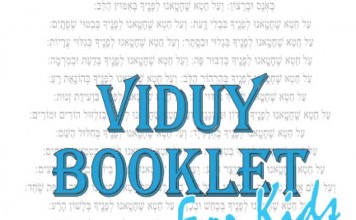 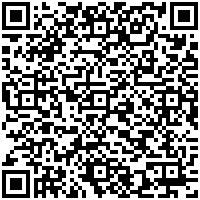