At the same time the German nation is celebrating 1,700 years of Jewish life in Germany (evidence of Jewish presence in the area now known as Germany dates back to the early 4th century), the luxurious Waldkliniken Eisenberg medical center in Thuringia has announced the opening of its own synagogue, offering its Jewish patients a consecrated room for traditional prayers. The synagogue is located on the first upper floor and is accessible by elevator, which can be operated in Shabbat mode.

According to their website, all guests’ rooms at the Waldkliniken Eisenberg––a 254-bed clinic housing the German Center for Orthopedics––offer outstanding comfort and furnishings, but “our most luxurious rooms can be found on the fourth floor on the LEVEL 5 comfort ward — the ward for private patients and patients paying for their own treatment. Here, we offer accommodation rivaling that of a five-star hotel. The generously proportioned rooms captivate with high-quality accessories and tasteful wall decorations and furniture created exclusively for the LEVEL 5 comfort station designed by star architect Matteo Thun.”


With that in mind, the hospital has gone out of its way to attract Orthodox Jewish patients and make them feel comfortable during their stay.

Its website declares: “With our five-star accommodations, the beneficial effects of architecture and nature, and our special services for Jewish patients, we deliver a new gold standard for your hospital stay. Shalom and welcome to the Waldkliniken Eisenberg.”

“Early planning for the new Waldkliniken building included the creation of all the conditions needed for a kosher kitchen so cooks at the Matteo restaurant would have two fully equipped and completely separate kitchen spaces. In addition, appropriate china and cutlery were purchased. Rabbi Motti Waitsmann is responsible for ensuring the kitchen is kosher and oversees instructing the staff and monitoring adherence to all kashrut rules.

“During stays, a mashgiach will supervise the observance of Jewish dietary laws for Jewish patients and be available for any religious questions the guests may have.”

Consecrated this Sunday by Rabbi Yitshak Ehrenberg, the Synagogue Eisenberg’s seats, bimah, and ark were made by Kibbutz Lavi and can be used by up to 16 people at the same time. The Torah was financed through donations and the Torah mantle was made in Israel.

Located in central Germany, Thuringia is bordered by Bavaria, Hesse, Lower Saxony, Saxony-Anhalt, and Saxony. It began as the Frankish Duchy of Thuringia, around 631 by King Dagobert I. Modern Thuringia was established in 1920 as a state of the Weimar Republic. After World War II, in 1949, Thuringia became part of the German Democratic Republic and was dissolved in 1952. It was re-established in 1990 following Germany’s reunification, as one of the new states of the Federal Republic of Germany.

The hospital appears to cater to an upper class of patients: “After ten years of development, planning, and construction, we are now offering patients of all health insurance companies the quality stay of a 5-star-rated hotel.”

The Medical Director Prof. Dr. Georg Matziolis wrote: “Our new building marks the start of a new chapter in the history of Waldkliniken Eisenberg. It’s a chapter that began with very early consideration for delivering optimal care to Jewish patients. After all, our philosophy of providing top medicine also includes providing top-quality accommodations for all patients — and that includes meeting cultural and religious needs.

“Plans for the spectacular building designed by star architect Matteo Thun included, for this reason, a synagogue and a kosher kitchen right from the very beginning. We offer you the outstanding medical care of the German Center for Orthopedics at the Waldkliniken Eisenberg, which includes the departments of Knee, Hip, Spine, and Hand, and Foot, along with the departments’ experts, as well as a five-star stay that complies with all kashrut rules. … We look forward to your visit with us!”

Berlin’s Rabbi Yitzhak Ehrenberg invited a long list of dignitaries to the inauguration of the hospital’s kosher wing, including Thuringia’s State Premier Bodo Ramelow, former president of the Central Council of Jews in Germany, Charlotte Knobloch, as well as the Thuringian State Rabbi Andreas Nachama.

Rabbi Ehrenberg called the idea of a synagogue in a German hospital “unique, very, very beautiful and positive,” and he is charged with carrying a Torah scroll to the Synagogue’s ark on Sunday. 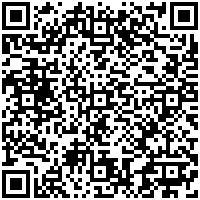