In 2008, the State Comptroller published a critical report on the situation at the Mt. Meron site, according to which:

Defects in the fire-fighting system and escape routes that fire services have been warning about for years, and constitute a danger to the public have not been repaired by the hekdeshim (religious trusts) that run the structure. Despite this, the fire services each year gave a temporary permit to hold the Lag B’Omer event. On Lag B’Omer 5768 (2007) the access roads to the Rashbi compound did not meet the needs of the rescue and security forces in the event of a multi-casualty incident. There was also a failure in the transportation system to the complex.

It was not the only State Comptroller’s warning about the possibility of a catastrophe on Mt. Meron. But it was followed by a rare willingness on the part of the government, during a stint in which the Haredi parties had been relegated to the opposition, to carry out the necessary repairs. But then the High Court of justice stepped in and its decision paved the way to Friday morning’s multiple deaths and injuries (2 Hours before Meron Tragedy, Holy Places Administrator Warned About Police Incompetence).


Since about 1918, the site of the Rashbi tomb has been managed as a public sanctuary by the Sephardic Trust of Tsfat. There is controversy as to whether the Sephardic trust had run the site even earlier, or whether the place was purchased and registered in its name only in 1888. But in 1920, the bulk of the compound was registered with the Mandatory Land Registry in the name of the Sephardic trust, while a smaller area was registered in the name of the Trust Committee of the Ashkenazi community of Tsfat. Since 1948, the area surrounding the compound is owned by the Israel Lands Administration.

Starting in 1954, the Ministry of Religious Services has been trying to renovate the area, running time and again into the barrier of the religious trusts. In 1963, the ministry ran a bid for proposals to fit the mountaintop to the needs of the thousands of pilgrims who congregate there on Lag B’Omer and an Israeli Haredi architect named Joseph Schonberger won the contract. At which point some Arab workmen Schonberger had hired to clear the area destroyed a 350-year-old marble tombstone and the religious trusts demanded that the entire project be killed.

In 1976, the Ministry of Religious Services leased Mt. Meron from the Sephardic Trust for five years and tried to repair the area at least partially – but ended up spending the entire time fighting in court all the many associations that owned bits of claims to the site. In 1981, the area was returned to its registered owners without a stitch of renovation.

Various splits and disagreements within the trusts have led to the emergence of four different religious trusts being involved in the management of the compound, in addition to the Ministry of Religious Services and the Holy Places Administration which fund the maintenance of the area and the annual Lag B’Omer event. The various endowments also collect funds in numerous spots scattered throughout the complex.

In response to the State Comptroller’s warning in 2007, the state appointed a committee of five members to investigate the situation and make recommendations. By the end of 2011, the Israeli government decided to embrace the committee’s recommendation and nationalize the site, removing ownership from the trusts and transferring it to the state. This was met with a fierce struggle that was waged by some in the Haredi community, who feared losing control on the character of the site, and of their sources of income through the charity collections.

At the end of 2013, the new Minister of Finance Yair Lapid, who served in a Netanyahu coalition government without the Haredi parties, signed an order expropriating the ownership of the place from the trusts, and transferring it to a new governmental company. But in January 2016, the government decided to dismantle the new company and transfer its responsibilities to the Holy Places Administration.

The Haredi associations petitioned the High Court of Justice, which issued an interim ruling that sent the parties to negotiations in order to reach an experimental model, instead of letting the government carry out the expropriation.

An attorney representing the Haredi trusts told Calcalist at the time that the High Court considered nationalizing the site an extreme measure, which should only be used after all the other measures had been exhausted.

Let’s hope that the High Court would consider the death of 45 Jews to mean that those less extreme options have been sufficiently exhausted and that no additional Jews need to lose their lives before the government is allowed to make the site less lethal.

The proposals that have been bandied about in the Israeli media on Sunday involve D9 bulldozers that would raze all the many decrepit structures surrounding Rashbi’s tomb, to create a plaza reminiscent of the wide-open area in front of the Kotel, where hundreds of thousands have been able to crowd together (in the years without a pandemic) without being crushed. 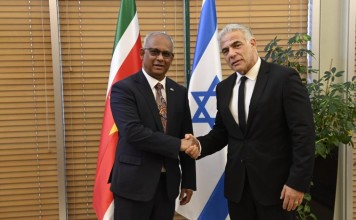