“Two hundred years ago, in April 1818, Mordecai Noah delivered his famous discourse before the members of America’s first synagogue, Congregation Shearith Israel, upon the consecration of their new house of worship,” states President Donald Trump’s April 30, 2018 proclamation of May 2018 as Jewish American Heritage Month.

The president could have chosen any one of literally thousands of notable American Jews whose contributions have made the US a beacon of light unto the nations. The fact that he picked the one Jewish American statesman who was penalized for his religion and became one of the earliest and most dedicated Zionist Americans says something profound about Trump’s understanding of the Jewish-American psyche.


A diplomat, journalist, playwright, and utopian, Mordecai Manuel Noah (1785 – 1851) was an early prototype of Major Alfred Dreyfus whose unjust conviction of treason in 1894 so inspired Theodor Herzl to seek a homeland for the Jews in the old-new land of Israel. In 1811, Noah was nominated by President James Madison as consul to the Kingdom of Tunis, where he rescued American citizens who had been captured by pirates and kept as slaves. But in 1815, Noah was removed from his post by US Secretary of State James Monroe, who informed him that his religion was “an obstacle to the exercise of your Consular function.” The incident caused outrage among Jews and non-Jews alike.

The Trump proclamation states that “reflecting on Jewish history as well as on the unique rights and privileges afforded to American Jews, Noah proclaimed that, ‘for the first time in eighteen centuries, it may be said that the Jew feels he was born equal, and is entitled to equal protection; he can now breathe freely.’”

But Noah harbored no delusions about the status of American Jews, and, in fact, his speech at the dedication of Shearith Israel’s new building in Manhattan, on April 17, 1818, was about the ancient longing of the Jewish people for Zion. It is interesting that President Trump has picked this fervent Zionist Jew to represent Jewish American life, since after his bout with Monroe, Noah reached the conclusion that the Jews must endeavor to conquer Zion and settle there.

“They (the Jews) will march in triumphant numbers, and possess themselves once more of Syria (Palestine was then known as Southern Syria), and take their rank among the governments of the earth. This is not fancy. I have been too much among them in Europe and Africa – I am too well acquainted with their views and sentiments in Asia, to doubt their intentions…. Let us then hope that the day is not far distant when….we may look forward toward the country where our people have established a mild, just and honorable government, accredited by the world, and admired by all good men….”

However, as a realist, Noah recognized that “until the Jews can recover their ancient rights and dominions, and take their ranks among the governments of the earth, this is their chosen country; here they can rest with the persecuted of every clime, secure in person and property, protected from tyranny and oppression, and participating of (sic) equal rights and immunities. Forty years of experience have tested the wisdom of our intuitions’ and they only will be surrendered with the existence of the nation.”

So, America is a nice place to visit, but we don’t want to stay here for too long, we belong in Southern Syria.

“In reaction to Mordecai Noah’s 1818 discourse, Thomas Jefferson wrote that American laws protect ‘our religious as they do our civil rights by putting all on an equal footing,'” the proclamation concludes. “‘The American Jewish community is a shining example of how enshrining freedom of religion and protecting the rights of minorities can strengthen a nation. Through their rich culture and heritage, the Jewish people have triumphed over adversity and enhanced our country. For this and many other reasons, the American Jewish community is deserving of our respect, recognition, and gratitude.'”

“NOW, THEREFORE, I, DONALD J. TRUMP, President of the United States of America, by virtue of the authority vested in me by the Constitution and the laws of the United States, do hereby proclaim May 2018 as Jewish American Heritage Month. I call upon all Americans to celebrate the heritage and contributions of American Jews and to observe this month with appropriate programs, activities, and ceremonies.”

And make Aliyah at your earliest convenience, Southern Syria really needs you. 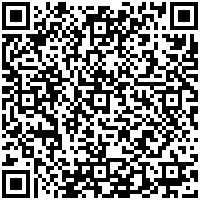