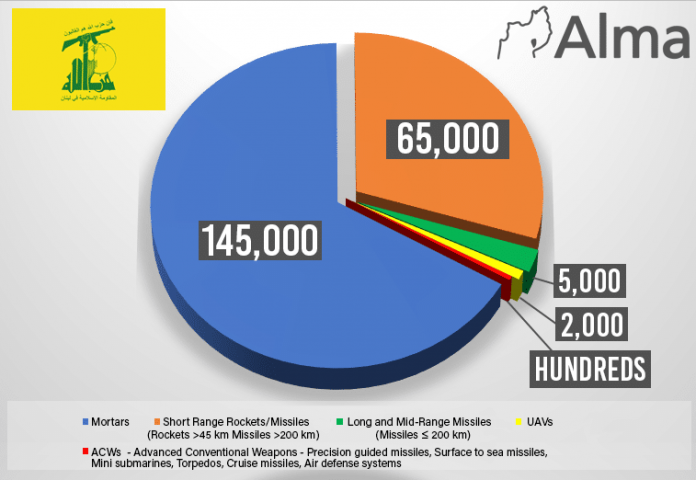 On February 16, Hezbollah leader Hassan Nasrallah spoke on the 30th anniversary of the assassination of his predecessor Abbas Moussaoui, who was eliminated by Israel in 1992, and referred to Israel’s activities against the transfer of weapons from Iran to Syria and from there to Hezbollah. He also referred to the Hezbollah project to convert regular rockets into precision missiles and the Unmanned Aerial Vehicles (UAV) that it possesses.


According to Nasrallah, Hezbollah is constantly receiving high-quality weapons from Iran, and the transfer of these weapons has not been compromised. Hezbollah can convert the thousands of missiles it possesses into precision missiles and has begun to do so years ago.

On the issue of the accuracy project, Nasrallah claimed that Hezbollah no longer needs Iran’s help. “Many missiles have already been converted into precision missiles,” Nasrallah declared. He also noted that Israel had also tried to undermine the ability to transfer UAVs into Lebanon, but Hezbollah managed to establish a production system on Lebanese soil.

Contrary to Nasrallah’s remarks, Hezbollah appears to be having a very difficult time utilizing its precision missile project, Alma estimates.

According to Alma’s information, Hezbollah now has a total arsenal of several hundred weapons belonging to what is known as “Advanced Conventional Weapons” (ACW). This arsenal includes the precision missiles already in its possession, as well as cruise missiles, apparently Iranian, advanced coastal missiles – the Russian Yakhont and C-802, anti-aircraft missiles – the SA-17 and SA-22, and miniature submarines and torpedoes.

Nasrallah exhibited a more accurate picture of Hezbollah’s UAV arsenal. Hezbollah can independently manufacture UAVs on Lebanese soil. Hezbollah’s self-made UAVs carried out operations against Israel as early as 2006, and is likely to have an arsenal of at least 2,000 UAVs.

The Hezbollah UAV that penetrated Israel on Friday is of the “Hudhud-1” type, made in Iran, or alternatively a UAV based on it and manufactured by Hezbollah in Lebanon. This small UAV is a fixed-wing aircraft used for patrol and photography.

Additionally, Hezbollah’s arsenal of “regular” missiles and mortars that include some 500 long- and medium-range missiles, 65,000 short-range rockets, and about 145,000 mortars

While this arsenal is less threatening than Hezbollah presents it, it is still a formidable danger that the IDF has been preparing for since the Second Lebanon War in 2006.

Over the years, the Israeli Air Force (IAF) and IDF have carried out thousands of attacks to thwart the Iranian entrenchment in the war-torn country and to prevent Hezbollah from accumulating advanced game-changing weapons.

Furthermore, Israel has repeatedly issued warnings that the terrorist organizations’ use of the civilian population in Lebanon as human shields will ultimately cause it to pay a very heavy price in a pending war.

Hezbollah is storing tens of thousands of rockets and missiles under homes in southern Lebanon. Israel has exposed this phenomenon at international forums and presented evidence, demanding that the relevant entities, including the United Nations, act on the issue.