More than 170 protesters were injured in central Beirut on Saturday in demonstrations demanding justice for the thousands of victims of the blast that destroyed half the Lebanese capital, the daily Star reported. Riot police fired tear gas at demonstrators who were trying to break into the parliament building. Police confirmed using live ammunition at protesters, on a day when, according to Lebanon’s health ministry, the death toll from the blast rose to 158 with an estimated 6,000 injured, 100 of them critically, and 21 still missing.

Protesters in Beirut called for a revolution as they stormed government buildings in anger over the deadly blast that devastated much of the city.

One police officer has been killed and hundreds injured in violent clashes. The PM has promised to propose early elections. pic.twitter.com/s2puDqNq7X

About 200 protesters took over the foreign ministry on Saturday, led by retired army officer Sami Ramah, who declared the building the headquarters for the “revolution.” Ramah called on the government to resign, in a statement he read on the occupied building’s steps “This authority must step down,” he said. Protesters raised flags with the image of a fist that has come to symbolize nationwide anti-government protests.

The protesters in inside the “revolution headquarters” burned documents and pictures of Lebanese President Michel Aoun, whom they blame, alongside Hezbollah leader Hassan Nasrallah, for the country’s years of political and economic crises. One demonstrator said, using a megaphone: “We are staying here. We call on the Lebanese people to occupy all the ministries.”

Here is a list of the Lebanese government ministries which have so far been taken over by protesters: Foreign Affairs, Economy, Energy, Environment, Offices of the Association of Banks.

On Friday evening, Hezbollah chief Hassan Nasrallah went on TV to claim that his group was not responsible for the warehouse that exploded in Beirut harbor, and that the warehouse did not contain any of Hezbollah’s weapons or ammunition.

“We as Hezbollah know perhaps more about what goes on at the Haifa port than what happens in the Beirut port,” he said, alluding to his previous threats to shoot rockets at the petrochemical plants and large ammonia container alongside Haifa bay.

In response, some demonstrators on Saturday hung a cardboard image of Nasrallah in a noose, as one Twitter user described it: “The head of the Southern Crime Gang in Jabbiya suspended from his virtual gallows in Beirut’s squares. Real wishing … pray with us.”

The same Twitter user also posted an image of a severed hand, complete with a ring, and warned that the Syrian and Iraqi civil wars are soon to be repeated in Lebanon.

French President Emmanuel Macron was the first Western head of state to visit Beirut on Thursday, as France’s ties with Lebanon go back to 1916, when France and Britain shared the Middle East between them. France ruled Lebanon until 1943, when the country was granted independence.

More than 60,000 Lebanese have signed a petition to restore the French mandate over Lebanon.

Macron promised direct aid to the devastated city, but also called for the country to devise a new political system. What’s needed is not a “French solution” but a “new political order,” the French president told reporters.

Meanwhile, several Twitter users posted images of Hezbollah trucks headed south with goods that had been sent by air from donor nations. Hezbollah Twitter users explained that since Beirut’s four hospitals are collapsing under the massive demand for treatment, many families have driven south to seek treatment – followed by the truckloads of supplies.

According to the Lebanese Red Cross, 110 protesters were wounded and 32 were evacuated to hospital as Lebanese riot police fired tear gas and some security forces shot live ammunition at protesters at the parliament building. Thousands of protesters gathered in Martyrs’ Square downtown, throwing stones at police and chanting, “The people want the fall of the regime,” and “Revolution, Revolution,” chants that date back to the Arab Spring demonstrations of 2011. Some held up signs saying, “Go away, you are all killers.”

Lebanon’s Kataeb Party resigned from parliament on Saturday in protest of government negligence and corruption. So far, five MPs have quit in the wake of the disaster. President Michel Aoun promised on Friday an investigation that would show if the blast was caused by a bomb or a rocket, or by the criminal of the harbor authorities. Police have so far detained 20 suspects, Aoun said, and they are under house arrest, awaiting questioning. 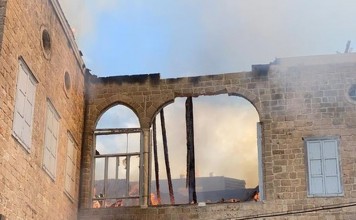