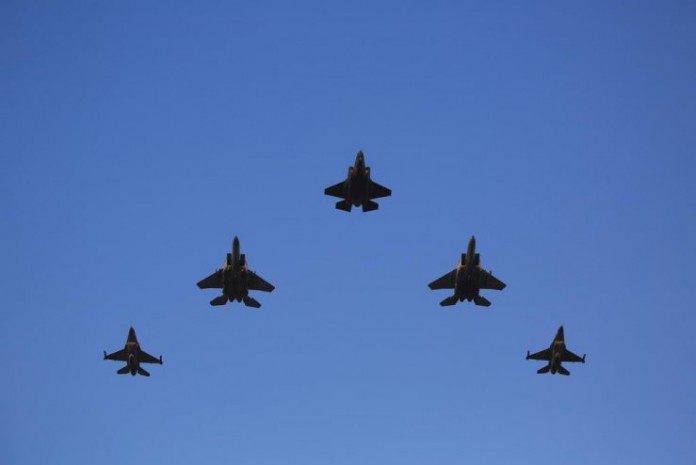 “The Israeli enemy carried out airstrikes with a burst of missiles, targeting some points in the central region,” the official SANA news agency reported.


A military source reported that the attack was conducted from the direction of the Mediterranean Sea and seven people were wounded, including a child, and the strike caused material damage.

The Syrian Observatory for Human Rights (SOHR) said that the four Syrian soldiers killed were members of an air defense crew, including an officer with the rank of lieutenant.

Another seven soldiers were wounded, according to the SOHR.

“Israeli warplanes launched at least eight missiles on weapons depots and Iranian sites in the Masyaf area” in the central province of Hama, the SOHR reported.

The area has previously been targeted by Israel and a missile development and accuracy center is located in the area. Iran and the Hezbollah terror organization are working on converting Hezbollah’s arsenal of rockets into accurate missiles.

The IDF has remained silent on the report, as it usually does after reported operations in Syria.

This is the twelfth IAF strike in Syria since the beginning of 2022, according to the SOHR’s count, which resulted in the destruction of multiple targets, including buildings, weapons and ammunition depots, and headquarters.

Over the years, the IAF has carried out thousands of attacks to thwart the Iranian entrenchment in the war-torn country and to prevent Hezbollah from accumulating advanced game-changing weapons.

According to the SOHR, the IAF conducted 29 strikes in Syria throughout 2021. The attacks hit 71 targets and killed 130 people, including 125 combatants from the Syrian military, Hezbollah and Iranian-backed Shiite militias.

The Damascus area was the most attacked area in 2021, with 12 attacks out of the 29. The Damascus airport, which serves as an entry point for weapons coming from Iran on their way to Hezbollah in Lebanon, was one of the main targets.