Israel said it will suspend annual high school trips to the Nazi death camps in Poland, planned for September through November, due to an ongoing dispute with Warsaw over security arrangements and content of the program.

According to Israel’s foreign and education ministries, a government delegation will travel to the Polish capital to meet with officials there for talks on future trips.

The two ministries said in a joint announcement Sunday that a delegation has already been to Warsaw to discuss the issue, but with no success.

“A delegation from the Ministries of Foreign Affairs and Education, and the General Security Service (Shin Bet) went to Warsaw and held negotiations for two consecutive days regarding the main issues that are on the agenda, primarily the contents of the trip and the security of the delegations,” according to the statement.

“The discussions on these issues continued intensively even after the delegation returned to Israel. Unfortunately, despite the many and intensive efforts of the ministries to reach agreements with representatives of the Polish government, this was not successful,” the statement said.

Spokespersons for the foreign and education ministries said their two ministries are prepared to renew talks aimed at finding a solution to the impasse, “provided there is an understanding of the Israeli needs in the discussed issues.” 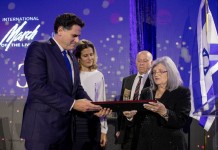