Former SodaStream chairman and CEO Daniel Birnbaum, along with another suspect who used to work for the company, are suspected of using insider information concerning the company’s exit and its purchase by PepsiCo for $2.2 billion. Birnbaum was questioned on Monday by representatives of the Department of Investigations and Intelligence of the Securities Authority on suspicion of using insider information, fraud and breach of trust.

A Tel Aviv court on Monday released Birnbaum on a 1.2 million shekel bail and banned him from leaving Israel. He was questioned again on Tuesday at the Tel Aviv offices of the Securities Authority.


Birnbaum is suspected of giving essential information about the company to a woman he had been seeing for several years and who had once worked for SodaStream, and whose name has not yet been released to the press. He is suspected of transferring this information on three separate occasions, each time before revealing it to the company’s investors.

The associate is believed to have used the insider information from Birnbaum to purchase company shares before news of its future plans had been published, netting ill gotten gains of 156,000 shekels. She is suspected of committing insider information as well as violations obstruction of legal proceedings.

Birnbaum was number 50 on the website TheMarker’s list of 100 most influential Israelis in 2018, where he was lauded: “He got into SodaStream when it was worth $6 million and catapulted it within a decade to the unprecedented value for a traditional beverage company – $3.2 billion, all that despite insisting on launching every one of its products out to the world with the Israeli flag flying on it, and not hesitating to express his opinions on controversial social issues such as the Surrogacy and Nationality laws.

“Soda Stream CEO Daniel Birnbaum is proof that industry executives should not sweep the boycott threats of pro-Palestinian organizations under the rug, as is common here, but fight them out in public from an Israeli position of power and pride. Birnbaum has also shown that involvement in shaping Israeli society does not necessarily hurt business.”

Can you say, “Another one bites the dust?” 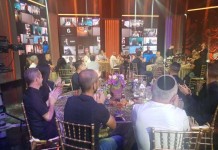