If you’re an aging Beatles fan like yours truly, today, Tuesday, March 19, 2019, might be the proper occasion to quote the late John Lennon’s song, aptly titled “God,” released on December 11, 1970, in which the quirky superstar, upon shutting down the Beatles project, sang: “The dream is over / What can I say? / The dream is over / Yesterday.” 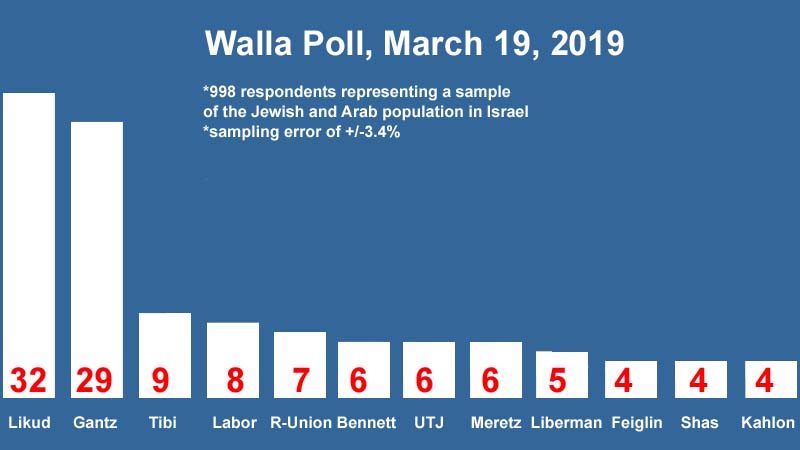 
Tuesday recorded the first major survey, published by Walla and conducted through an internet panel among 998 respondents representing a sample of the Jewish and Arab population in Israel with a sampling error of +/-3.4%, showing a wide lead for the right-wing block, and revealing that the aggressive campaign Netanyahu and the Likud party have been are running against Gantz is also affecting the public’s view of who is better suited to be prime minister: Netanyahu leads with 46% with a very large gap over Gantz, who receives only 28% support.

Like it or not, the fact is that a vast majority of Israeli Jews today are leaning to the right, and that whatever Gantz, Lapid et al have been trying in order to seduce them is just not working. Israeli Jewish voters today understand that Netanyahu is deep in a quagmire of accusations of corruption, and a month or so after the campaign’s start, they may not like him as they used to, but they still trust him and the right more than they do the alternative.

To these Netanyahu can choose to add two out three additional partners: Liberman – 5; Feiglin – 4; Kahlon – 4. It gives him an opportunity to keep his nemesis, Zehut’s Moshe Feiglin, out in the cold, and suffice with the the 9 votes of Liberman and Kahlon, whom he can bargain down, playing one against the other.

In short, Bibi has never been this strong. The next polls will obviously tell whether this one starts a new trend or is merely a glitch.

Gantz could lure in both Liberman and Kahlon in return for very juicy portfolios, but the likelihood of this is miniscule.