News 12 commentator Amit Segal, who is identified with Israel’s right-wing, believes Itamar Ben-Gvir’s Otzma Yehudit party would declare today, Monday, that it is no longer running for the Knesset. According to Segal, Ben-Gvir is likely to do the math and realize it would be more beneficial for him to drop from the race than stay.

At the moment, Ben-Gvir is worth 84,000 votes in the commodity futures exchange, based on his yield in the September 2019 election, Segal reasoned. “This figure will be almost certainly cut in half” in Monday’s vote, so “it’s better for him to retire rather than be cut.”


Segal further reasoned that “if the right brings 59-60 seats without his dropping off, he would be vilified forever, he would be eliminated. Even if the right got 61 seats without him. On the other hand, if he drops and the right wins 61 seats, he can claim it was his doing. If, on the other hand, he drops and they still lose – no one could blame him. He can say, I retired and it didn’t help.”

There’s also the issue of campaign funding. Should Ben-Gvir stay on but fail to top 1% of the votes, he would be denied the 1,400,000 shekel grant from the state. But according to Segal, he was promised this amount from the Haredim should he drop now.

Otzma Yehudit claimed on Sunday morning that the Likud had violated it agreement with them: apparently, they reached a deal overnight that May Golan, who is slated 34th on the Likud’s Knesset list, will serve as an Otzma Yehudit MK, should Netanyahu be able to establish a 61-seat government. Otzma also claimed that the Likud committed to lowering the threshold percentage, and to revoking Article 7A of the Knesset Basic Law, forbidding people who harbor racist views from running to the Knesset. Another item in the same overnight deal: the illegal Arab shantytown Khan Al Ahmar will be evacuated in six weeks.

“Strangely, this morning, Likud representatives have announced that the prime minister withdrew from the agreement and refuses to keep even these conditions.”

Ben-Gvir said on Sunday: “Netanyahu is again thwarting the 61-member government, and seems to be interested in a unity government with Gantz rather than a rightwing government. If Netanyahu is unable to carry out these things, then he does not really want to implement rightwing policies, and Otzma Yehudit must stay in the running, to keep the Likud in the rightwing camp.”

Meanwhile, Rabbi Chaim Kanievsky, one of the most important Haredi poskim, on Sunday morning called on his followers not to vote for Ben-Gvir, because, as he put it: “Voting for him would be an act of madness.”

Update: 8:30 PM – Ben-Gvir will not be dropping out of the elections. 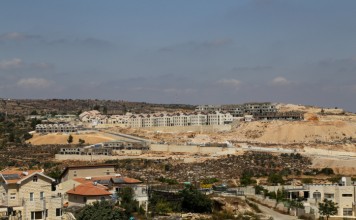