“What are you doing? what are you doing, Man?” Bennett is heard asking Estée’s kid, to which Lauder responds: “You are my inspiration.” Taken aback, Bennett retorts: “I’m your inspiration? If you say that, I’ll lose five seats in the Knesset.” Lauder laughs, and Bennett says an angry, “Shalom” and moves on down the line of dignitaries.

Bennett was referring to an op-ed Lauder wrote in Sunday’s NY Times (Israel’s Self-Inflicted Wounds) in which the elderly trust fund boy assembled every last cliché ever conceived about the two-state solution in yet another effort by a diaspora Jewish macher to shove this wet sock into the mouths of those pesky Israelis who won’t listen to reason.

It’s a masterpiece of copy & paste blurbs that didn’t make sense back when they began to erode Israel’s safety, in the early 1990s – and they certainly make less sense today. They’re also mostly alternative-facts, such as this pearl: “the reality is that 13 million people live between the Jordan River and the Mediterranean Sea.” Based on which census? The only reliable numbers we have come from the Israeli Central Bureau of Statistics that state the current figures (2018) for Israel’s population as: 8,809,200 Israelis altogether, out of whom 6,566,200 are Jews and 1,841,700 are Arabs.

Lauder’s implication that in the rest of the area between the river and the sea there are 4.2 million Arabs is not based on a scientific census because such a document does not exist. The views on this matter vary from 1.5 or 2 million to 5 million plus, but it doesn’t matter – not as long as actual census takers had been sent out there to knock on real doors and gather data.

Lauder follows with the oldest and most vile assertion, which he parrots in the NY Times, a newspaper which, to its credit, has published its share of intriguing alternatives to the 2-state solution. But Lauder, apparently unaware, repeats the Peace Now lie: “If current trends continue, Israel will face a stark choice: Grant Palestinians full rights and cease being a Jewish state or rescind their rights and cease being a democracy.”

Estée Lauder had another, smarter boy, Leonard, but she made him run the company – leaving Ronny to mess with Israeli Jews from the safety of his New York City bastion. Which leads us to the inevitable question: has Ron Lauder read anything about the “peace process” since 1994?

Halfway through his diatribe, Lauder turned to attack Israel for being so damned Orthodox Jewish and for refusing to emulate his own egalitarian and progressive Jewish faith. It’s the old “Why can’t they be more like us” question, the answer to which is, if a million Reform Jews made Aliyah they could change Israel’s adherence to Orthodoxy – and until they do, their opinion doesn’t matter.

Speaking from the podium at the anti-anti-Semitism forum Monday night, Naftali Bennett gave it to Lenny Lauder’s younger brother: “Ron, I read your piece in The New York Times. It was not a great piece,” Bennett said. “I very much respect you, but I disagree. Assimilation in America is not a result of Israel’s policy but a result of Jewish prosperity in America”

Bennett stressed that assimilation is “an ongoing trend we have to fight back,” and then noted: “I don’t see a moral equivalence of settlement building – what I call building communities in our homeland – and Palestinian incitement. It’s not the same thing.”

Ha’aretz reported that at this point US Ambassador David Friedman clapped in approval. Which stands to show you there are still sane and well read American Jews, but most of them just aren’t invited to write op-eds for the Times.

The Astonishing Potential Of Man 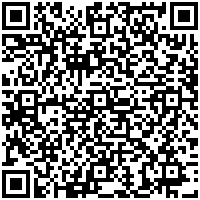