A woman poured gasoline and started a fire outside the Yeshivah of Flatbush Joel Braverman High School at 1609 Avenue J in Brooklyn Thursday evening, police said. A yeshiva security guard quickly put out the fire.


The woman approached the front of the high school around 6:45 PM Thursday, poured gasoline on the sidewalk, and set it on fire. The security guard rushed over and quickly put out the fire, then called the NYPD.

Lieutenant Ira Jablonsky of Brooklyn South Community Affairs told Hamodia: “There was no danger or damage. The NYPD and the FDNY dealt with the situation and took samples to determine just what type of liquid was used.”

Update: This article has been updated with new information, including the correct gender of the suspect. 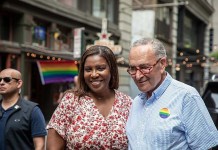 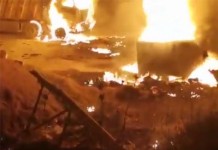 At least 20 Killed in Fuel Truck Explosion in Lebanon