Saudi Arabia says peace with Israel is possible – but only after the establishment of a Palestinian Authority state along the “67 borders” – and with “east Jerusalem” as its capital.

The statement came in response to claims that Saudi Arabia’s opening its airspace to all civilian airliners was aimed primarily at allowing Israeli overflights.


Saudi Foreign Minister Adel al-Jubeir shut down the assumption and went even further in an interview late Friday with CNN’s Wolf Blitzer.

al-Jubeir told Blitzer that normalizing ties with the Jewish State is indeed a “strategic option” – but only after Israel hands over half of its capital and all post-1967 territories to the Palestinian Authority for a new Arab country.

“We have said that Saudi Arabia supports the Arab Peace Initiative. In fact, we offered it, and we have made it clear that peace comes at the end of this process, not at the beginning of it,” al-Jubeir told Blitzer.

“We have made it clear that we need to have a process, and this process needs to include the implementation of the Arab Peace Initiative. We have committed to a two-state settlement with a Palestinian state on the occupied territories with east Jerusalem as its capital – that’s our requirement for peace. That hasn’t changed,” al-Jubeir said.

“We have made it clear that peace is possible, that peace with Israel is a strategic option, but there are certain requirements that have to happen before this takes place.”

The 2002 peace plan advanced by the Saudis offers full normalized relations with all 22 members of the Arab League in exchange for Israel handing over half its capital and all post-1967 territories, including sections of Judea and Samaria that are now home to more than half a million Israelis.

The interview was broadcast several hours after US President Joe Biden arrived in Jeddah, where he said Riyadh’s decision to open its airspace was the “first tangible step” towards normalization of ties between Saudi Arabia and Israel.

The US and Saudi Arabia issued a joint statement saying, “Regarding Israel-Palestinian issues, the two sides underscored their enduring commitment to a two-state solution, wherein a sovereign and contiguous Palestinian state lives side-by-side in peace and security with Israel, as the only way to resolve the Israeli-Palestinian conflict in accordance with the internationally recognized parameters and the Arab Peace Initiative.

“The leaders noted their determination to remain closely coordinated on efforts to encourage the parties to demonstrate – through policies and actions – their commitment to a two-state solution. The United States and Saudi Arabia welcomed all efforts that contribute to reaching a just and comprehensive peace in the region.”

During his visit on Friday to Bethlehem, Biden stood silent as Abbas called for his administration to “close the chapter of the Israeli occupation of our land and ending the act of racial discrimination, the apartheid against our people, and halt unilateral actions…

“The key to peace and security in our region begins with recognizing the state of Palestine and enabling the Palestinian people to achieve their legitimate rights in accordance with international legitimacy resolutions.”

The Palestinian Authority leader added, “It’s been 55 years [since 1967] and 74 years since the Nakba (catastrophe, referring to the establishment of the State of Israel). I ask you, when will the occupation end? When will our nation get its freedom and independence?”

As is made clear in Palestinian Authority school textbooks, the Ramallah government aims for the establishment of its hoped-for state in the entire state of Israel; the so-called “two state solution” is seen as an initial, temporary step, which “two state” supporters fail to recognize – or choose to ignore. 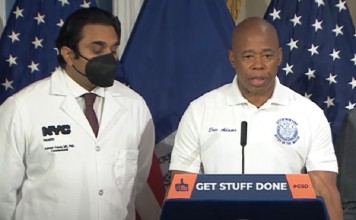 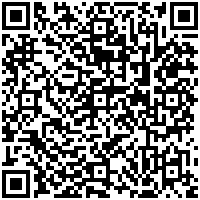