Jordanians across from Eilat have a new view of Israel today, hours before the beginning of Memorial Day for Fallen Soldiers, thanks to the work of Yemenite Chabadnik Roni Pilo who has painted a gigantic flag on an Eilat Navy hangar that covers almost an entire acre.

The display of the flag can be seen clearly from the Jordanian shore and cities across from the Gulf.

Pilo worked for three weeks, day and night, to finish the work in time for Memorial Day on Monday night and Tuesday, followed by Yom Ha’atzmaut.

The idea was the brainchild of Eilat Mayor Meir Yitzchak HaLevi, and work was carried out with the help of contributions from the French Jewish community and Tambour Paint Company, which donated 740 gallons of paint.

Pilo used special techniques to utilize light and shade and mixed six different shades of blue and six hues of white to make the flag display appear as if it is 3-D and moving on the hangar at the Israeli Navy base.

Mayor HaLevi said he came up with the idea to improve the aesthetics of the huge hangar.

He said there was no intention to irritate anyone, especially the Arabs across the waters. “We are not here to annoy anyone,” he said in a statement quoted by the Yediot Acharonot newspaper.

“Wherever the flag can be seen, that is all the better,” he added. “We have no reason to apologize for that. Displaying the flag permanently in Eilat, an international tourist and sports city that hosts 3 million people a year from Israel and the entire world, demonstrates our national pride and love for the country.

Navy base commander Ilan Mintz said, “There is nothing more symbolic the day before Remembrance Day for Fallen Soldiers…than a strong and loving embrace.”

The base will be open to visitors on Yom Ha’atzmaut. 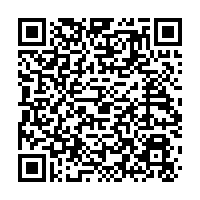