Most of the major figures or sites of modern European history play at least a minor role in this book. Not only do we see Germany’s Jewish laws play out, the obstinance of German Jewry in refusing to believe Germany would turn on them, the flight of often newly-impoverished Jews to Palestine (the real one), the German railroad system, Auschwitz, and German Communists, but the Berlin Wall, and Checkpoint Charlie also have cameos.

When the author was a teenager her grandmother Nellie made her promise to recover the Wolff building when the Berlin Wall came down.


And that is what Dina Gold set out to do.

But even after World War II, the Wolff building on Krausenstrasse was inaccessible: it was just blocks over into East Germany, beyond the Berlin Wall.

Ultimately, this book is a testament to the grit of one Jewish granddaughter’s refusal to give up until she finally achieved a final victory over the Nazi regime that destroyed her family’s business and home, as well as members of her family and most of the German Jewish world.

Dina Gold’s pluck, her skills honed as an investigative journalist for the BBC, a serendipitous discovery of documents in an old suitcase by extended family members, and the well-known German propensity for keeping meticulous records, all  combined to create a perfect storm in which Gold found shelter.

Shortly after the fall of the Berlin Wall, Gold was on assignment to cover the elections in Germany. She took a few extra days, marshaled her nerve, and marched into the grand reception area at 17/18 Krausenstrasse.

“I’ve come to claim my family’s building,” Gold told the man who demanded to know what she wanted.

Gold had with her a 1920 Berlin business directory which showed the owner of 17/18 Krausenstrasse: H. Wolff. “H. Wolff, Herbert Wolff, he was my grandfather.”

And so the chase began.

The half-steps, missteps and agonizing slow march of Gold’s relentless pursuit makes clear that this was not a fairy tale, but the result of a slow, determined and laborious search for justice. Her commitment and the kind of sleuthing few other than a crack investigative reporter, which is what Gold was, led Gold to succeed where few others could prevail.

Yet Gold’s victory is still one we all should savor.

Gold wants to make something very clear: “Our property was taken and I was determined to get it back. But the murders of millions of people – that loss is something that can never be undone, and that loss was far worse than ours.”

What drove Dina Gold? She said, ultimately, no matter what it took, she was “not going to let them get away with it.” Don’t let this book get away without your reading it.

Will the PA Leave the Arab League in Protest of Peace Deal? 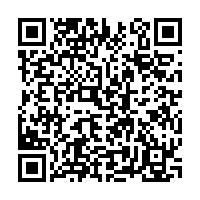