The Observer wrote a fascinating article about the tape from an interview given by Hillary Clinton to The Jewish Press back in 2006.

What makes it so interesting or “relevant” to the public right now is that in the interview, Clinton explicitly talked about the mistake she felt the United States made by not rigging the Palestinian Authority elections to ensure that Hamas didn’t win – which it did, winning 74 seats to Fatah’s 45 seats on the Palestinian Legislative Council, and then eventually taking over Gaza by throwing Fatah officials off the roofs of Gazan buildings.

Clinton didn’t use the word “rig” but it is clear that this is what she meant.

The Observer found it odd that the story was no longer available on JewishPress.com, and we discovered that the antisemitic conspiracy theorists on the Internet are trying to create an entire backstory as to why The Jewish Press (and the Jews) censored, suppressed and hid an interview where Clinton discusses rigging an election, in light of Trump’s accusations against her in the current US elections.

Unfortunately for the conspiracy theorists, the answer is simply a technical one.

When we rebuilt the JewishPress.com website in 2011 and migrated it over to a new platform, that article was one of several that didn’t survive the migration process due to some odd character codes in the text.

But the article wasn’t lost.

Thanks to the technology of the WayBackMachine, the original article was preserved and archived on the Internet, untouched by human hands, odd ï¿½ characters and all.

Last night, we republished the Hillary Clinton interview back onto the JewishPress.com website.

For those that believe The Jewish Press hid the entire story about Clinton wanting to rig the Palestinian Authority elections, they can now actually see for themselves that this was, in fact, her first answer that was posted in the original article.

Sen. Clinton: First, I don’t think we should have pushed for an election in the Palestinian territories. I think that was a big mistake. If we were going to push for an election, we should have made sure we did something to determine who was going to win instead of signing off on an electoral system that advantaged Hamas.

Nothing was hidden. Back in 2006, Hillary Clinton did talk about desiring to rig an election of a foreign government, a government with no democratic traditions, but with a rather strong history of supporting terrorism, and we published it.

Without delving into the politics of it, some might even find the idea of ensuring that radical Islamic terrorists don’t take charge of an already moderate-terrorist laden government to be a commendable goal – unlike when the US State Department, under President Obama, funded OneVoice and V-15 in an attempt to manipulate democratic Israel’s recent elections. 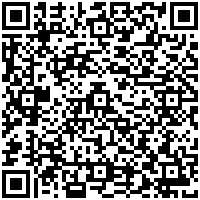