Humor is a great weapon in politics. You can make fun of a person’s mistakes, their looks, their accents, their views – and if your audience is not well versed in the issues at hand, you can bury your victim. Because funny is right.

I’ve sat through a few hundred hours of the Jon Stewart show, laughing helplessly at the way Stewart and his stalwarts, several generations of Daily Show writers and on camera folks skewered people I hated. Then I sat many other hours, yelling back at the screen when they used the same tactics to mock and destroy people I agreed with.

In political satire, there’s no fair game. But the saving grace of most political satire in the West is that there’s enough of a kernel of truth for the point to be made within the boundaries of an honest debate.

I don’t think the left at this point is capable of discussing the SodaStream story within reason.

A case in point is cartoonist Katie Miranda, who drew “The real SodaStream commercial they don’t want you to see,” with a thuggish Johansson manhandling a poor Palestinian worker at the occupying SodaStream factory in Ma’ale Adumim.

Katie Miranda is an illustrator, jewelry designer, and cartoonist living in Oakland, CA. She is currently working on a graphic novel called “Tear Gas in the Morning” which is a memoir about the nonviolent resistance movement in Palestine.

“Nonviolent resistance movement in Palestine.” I knew him, used to live with his brother Edmund in Gaza City, until the Hamas dragged his torn body behind a motorcycle…

The toon works to a point, presenting the Palestinian narrative at the expense of the Israeli side. So far so good, maybe not funny but within the boundaries.

But the last frame, the payoff, is a complete lie, based on a fabrication, it’s vicious and nasty and stems from the left’s inability to win without distorting reality.

In the cartoon, where the worker says “We Palestinian workers in tis factory always feel like we’re enslaved,” the text comes with two asterisks, pointing to a footnote below, “supporting” the outrageous statement.

The citation is from a fabricated hate piece by Stephanie Westbrook I covered last week, out of the entire work force at SodaStream, (SodaStream “treats us like slaves,” says Palestinian factory worker), has managed to dig up only one employee with bad things to say against the seltzer maker. He is presented only as M., suggesting, of course, that he would lose his job as soon as his bosses found out he blew the whistle on them.

M.’s idea of slavery is that, as a resident of the PA, he had to undergo a security check before getting hired, and that he is not allowed to pray during work time and may only pray on his lunch break.

Now, Miranda supports the horrible line uttered by her Palestinian character, with the reference to that vicious assortment of lies, counting on the fact that the reader isn’t going to check on the facts behind the toon.

So now it’s been established: there’s an article that documents slavery at the SodaStream factory in Maale Adumim, because it’s right there, in front of you, as part of the Miranda cartoon.

Of course, it’s just so happens that the toon is an image file without an active link, so that in order to verify Miranda’s outrageous statement, you would have to copy the entire URL onto a separate browser tab. Oh, sure.

You got caught in a lie, Miranda. 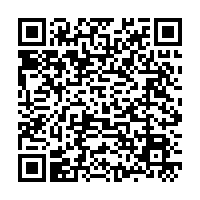