Joint Arab List Chairman MK Ayman Odeh posted in Arabic on his official Facebook page on Sunday calling for a third Intifada and praising Arab youth for their role in the recent violent clashes in Jerusalem.

Odeh declared: “This wonderful and honorable victory belongs to the youth of Jerusalem. These clashes are sometimes calm and sometimes erupt, and it will be so until the intifada comes and brings an end to the occupation and hoists the Palestinian flag over the Al-Aqsa Mosque, over the churches, and over the liberated gates of Jerusalem. We extend our greetings to the free people of Jerusalem.”

Im Tirtzu, which first reported Odeh’s post, said in a statement: “In recent days, we have been monitoring the posts of MKs from Arab parties who have nearly all voiced praise for the Arab rioters in Jerusalem. This support for violence against Jews is further proof why it would be a disaster to establish a government reliant on outright anti-Zionist parties that support violence and oppose Israel’s existence as a Jewish and democratic state.”

Im Tirtzu added: “We call on the leaders of the right-wing parties to take personal responsibility and form a right-wing government.” 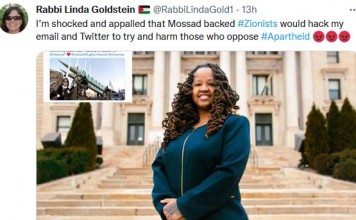