The High Court of Justice on Wednesday rejected petitions filed by the Arab residents of the illegal outpost of Khan al-Ahmar, near Ma’ale Adummim east of Jerusalem, and ruled that the decision requiring the demolition of their homes and their evacuation from the land must be carried out as planned.

Khan al-Ahmar is a shantytown erected in Israeli controlled Area C by the Palestinian Authority, 17 miles east of the Jerusalem municipality, with 173 Bedouin residents, including 92 children, who live. Khan al-Ahmar is located between the Israeli city of Ma’ale Adumim and the village of Kfar Adumim. It is also located at the narrowest point on the peanut-shaped map of Judea and Samaria. This means that should the normal urban sprawl extend from Jerusalem to Ma’ale Adumim, it would dash any hope for a continuous Palestinian State.


On May 24, 2018, the Israeli Supreme Court ruled that as of June, the IDF may move the Bedouin outpost to a different location, rejecting the local residents’ petition on the grounds that they had unlawfully engaged in building the outpost.

In today’s ruling, the justices wrote: “There is no question that we are dealing with illegal construction,” and reiterated that “there is no reason to reopen the case.”

The justices ruled that the injunction against the demolition order is to be revoked within seven days and the state is allowed to evacuate the illegal residents.

Referring to Arab petitioners’ threats that a violent protest is to be expected in the event of an evacuation, the justices wrote: “We can only express our hope that the eviction orders will be carried out peacefully, without physical resistance, so that the contents of each structures be cleared in an organized fashion.”

The ruling criticizes the PA’s move to start the school year early at the local school—which is slated for demolition—in the hope that the High Court of Justice would not permit the destruction of a school during a school year.

The justices also made clear that they would reject outright any new petition for an injunction against the demolition and eviction of the illegal shantytown.

Defense Minister Avigdor Liberman praised the court’s decision, tweeting: “I congratulate the High Court justices on a courageous and necessary decision – in the face of a coordinated, hypocritical attack by [Mahmoud Abbas], the left and the European countries. No one is above the law. No one will prevent us from exercising our sovereignty and our responsibility as a state.”

Naturally, that’s what this entire 8-year struggle over Khan al-Ahmar has really been about: sovereignty, either Israeli or “Palestinian,” it can’t be both. 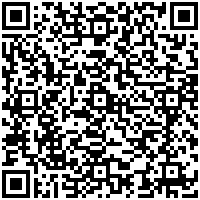