A 14-year-old girl was seriously injured in her head Thursday evening in Kiryat Arba, possbily by an Arab sniper who shot her from within Hebron.

The IDF Spokesperson has stated that it does not appear that the incident had a nationalist background, but the matter is under investigation. According to Hillel Biton Rozen of News 14, she was hit with a 7.62 caliber bullet which was fired in a direct shot from a few hundred meters away. T

The girl’s family is asking for prayers for the healing of Tamar Bat Nira who is currently being treated in the hospital.

The MDA Spokesperson repoted: At 4:45 PM, a report was received at MDA’s 101 hotline in the Jerusalem region about a young woman who was injured and brought to a local clinic in Kiryat Arba. MDA medics and paramedics provided medical treatment and referred her to Hadassah Ein Kerem Hospital in serious condition, unconscious.

Tamar underwent head surgery at Hadassah Ein Kerem hospital. She is in serious condition, is sedated and on a respirator in the children’s ICU.

On March 26, 2001, an Arab sniper shot to death Shalhevet Pas, a 10-month old baby who were in her carriage outside her home in Kiryat Arba.

Last Shabbat, another attack took place in Kiryat Arba when a terrorist opened fire on Jews in an Arab-owned grocery store in the settlement. Ronen Hanania, 50, who was inside the store, was murdered, and Ofer Ohana, a Hatzalah Without Borders volunteer, was seriously injured. Three other people were slightly injured in the incident. The local security coordinator who rushed to the incident ran over the terrorist, and an off duty officer killed the terrorist. 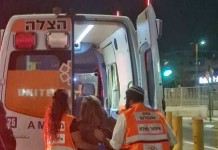 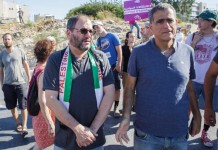