The Palestinian Authority built a new school on the site of the historic Hamam al Maliakh hot springs, located in the heart of the Jordan Valley’s Bazak Nature Preserve, Regavim reported on Sunday. The site is in Area C, which was designated by the Oslo Accords as being under full Israeli military and civil jurisdiction.

Some years ago, an Arab family took over the site, turning the historic structure into a private residence and making structural changes as if it were their personal property.


Now, in addition to the illegal invasion and damage to the site, a new school was recently established there, complete with signage announcing that the construction was funded by the European Union and group of European countries – which have been playing a major role in the PA’s quiet takeover of Area C.

According to Regavim, the new school is adorned with colorful murals, concealed under tarpaulin sheets from inspectors of the IDF Coordinator of Government Activities in the Territories.

Regavim inquired with the Civil Administration as to how such a school had been built at the heart of a historic site located in a national nature preserve with no one in authority on the Israeli side doing anything to stop it. We will publish the response should it be provided.

Regavim’s Field Coordinator for Judea and Samaria Eitan Melet said “the Palestinian Authority is playing hide and seek with the Civil Administration. The PA builds ‘confrontation schools’ – illegal schools in Area C – for the purpose of anchoring a network of outposts in Area C. The Palestinians come up with new, inventive ways of camouflaging their activities, and the Civil Administration, either intentionally or unintentionally, continues to fall into the very effective trap that the PA is using over and over again.”

According to Melet, “once these illegal schools are completed, they create a win-win public relations headache which the Civil Administration hasn’t learned to contend with. The PA appears to be the only team on the field.”

Over the week of Passover, the PA erected large-scale illegal construction, including on sites that are already under court-issued work-stop orders. Taking advantage of the Civil Administration’s holiday recess, the PA carried out lightning-paced construction at several strategic locations in Area C.

One of the projects aimed at establishing facts on the ground in Area C is on the outskirts of Rujeib, located between Shechem (Nablus) and the Jewish community of Itamar. New areas were leveled for construction and infrastructure was laid for an illegal construction project that broke ground in recent months (Palestinian Authority ‘Celebrated’ Passover with Illegal Construction Blitz in Area C). 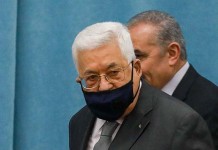 President Biden Should Keep His Eye On The Ball In Jerusalem