“Never has there been a national independence movement that has refused an independence offer on the grounds that it does not include all the territory the movement seeks,” noted Professor Eugene Kontorovich, who on Wednesday testified in favor of moving the United States Embassy to Jerusalem at a special Congressional hearing of the Subcommittee on National Security.

Prof. Kontorovich, who serves as Director of International Law at the Jerusalem-based Kohelet Policy Forum and is Professor of International Law at Northwestern University, told the committee that his testimony would explain the reasons behind the US embassy’s current location, as well as explain the structure of the Embassy Act, to show that the Embassy’s location outside of Jerusalem undermines US foreign policy and helps isolate Israel.

Prof. Kontorovich then discussed the “oft-repeated national security arguments in favor of delaying the Act’s implementation,” noting that “these arguments have not aged well since they were first rehearsed upon the law’s passage 22 years ago. Moreover, they reward threats of violence, and allow US policy to be held hostage by terrorists and aspiring terrorists.”

In conclusion (the full text of the testimony can be downloaded here), Prof. Kontorovich said:

“It is not surprising that the Palestinian Authority threatens dire consequences if the US moves its Israeli embassy. It has found that such threats work. This means that waiving the Act based on such threats in fact invites further threats: the waiver creates its own predicate. The national security arguments for waiver in effect allow US foreign policy to be taken hostage by terrorists, or anyone willing to make threats. America’s stance on such an important issue cannot be dictated by terror. Instead, the US should make clear that if the PA allows any action against Israel or the US in response to a non-waiver, the US will close PA offices in Washington.

“Finally, I would recommend that the US Embassy ultimately be moved to the site of the current US Consulate in the Arnon Hanetziv neighborhood. Only this can give full effect to Congress’s policy of moving the Embassy in a ‘unified’ Jerusalem. This location is in what was a demilitarized zone under the 1949 Armistice Lines. The Palestinian claim to those areas of Mandatory Palestine conquered in an aggressive war by Jordan and Egypt do not apply to this area. However, it would signal that the US does not regard these Armistice lines as creating no-go zones for Jews or Israelis. Moving the Embassy to this location could catalyze the peace process by showing the Palestinians that there is a cost to their repeated refusal of Israel’s offers of statehood, which the US has supported. The Palestinians have been offered an independent state in the peace negotiations in 2000 and 2001, and Netanyahu was reportedly prepared to make far-reaching concessions in 2014. Each time, the Palestinians said no.

“Never has there been a national independence movement that has refused an independence offer on the grounds that it does not include all the territory the movement seeks. Imagine if the United States refused to accept peace with Britain because it did not give the newly independent colonies the northern border they sought. Yet the Palestinian rejection of successive proposals carries no negative consequences for them — it just raises the expectations from Israel in the next round.

“One of the main reasons for the failure to reach a peace deal is the unspoken assumption that protracted and repeated Palestinian rejectionism costs them nothing diplomatically, while creating constraints for Israel. Moving the Embassy to Jerusalem, and in particular to the current major consular facility, would break this deadlock and open the doors to progress.

“Thank you for giving me the opportunity to address these issues, and I welcome your questions.” 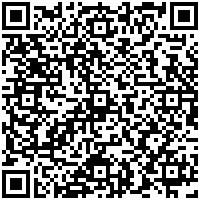