The Regavim movement on Monday petitioned the Jerusalem District Court after the Civil Administration had refused to provide data regarding the extent of the electricity connections allegedly facilitated by the East Jerusalem Electric Company, which is subject to Israeli law, and which connects thousands of illegal Arab homes in Judea and Samaria.

Tens of thousands of illegal structures have been erected over the last decade in Area C in Judea and Samaria, which constitute the Israeli-controlled part of the liberated territories. Most of these structures are connected to the power grid of the East Jerusalem Electric Company, an Israeli company supervised by the Public Services Authority which is the only licensed Israeli power distributor other than the Israel Electric Company.


To understand the extent of the violations of the integrity of Area C by this Israeli-regulated company, Regavim last August filed a freedom of information with the Civil Administration. The request focused on electrical connections to illegal homes that stand a scant few meters from the entrance to the town of Efrat in Gush Etzion. These homes were built without a permit by Arabs, and documentation shows that they are connected to the East Jerusalem Electric Company network.

Regavim wanted to know how the East Jerusalem Electric Company received permission to connect the illegal buildings to its power; as well as to place electricity poles without an approved plan. The NGO also demanded to know whether there are approved electricity plans, and alternatively whether these illegal buildings have building permits or exemptions from building permits.

The Civil Administration refrained from disclosing the information, and after a second request responded that they are “laboring vigorously to formulate a response to the request,” and that “these are old issues that require an in-depth examination of the archives.”

Except that to Regavim’s best knowledge, those electrical connections had been made only a few months earlier, making the need to “search the archives” seem, well, not wholly consistent with reality.

After months had passed since Regavim received this puzzling response from the Civil Administration, the NGO filed a freedom of information petition with the court to compel the Civil Administration to provide satisfactory answers regarding what appears on its face to be the facilitation of illegal conduct on the part of a state licensee.

“Beyond the safety hazards that accompany unauthorized electrical connections without any supervision, this move constitutes making permanent the illegal construction in the area,” said Yachin Zik, director of operations at Regavim. “It is inconceivable that a company which is subject to Israeli law would make pirate electrical connections to structures that built without a permit.”

“Moreover, while the Israeli government has announced a campaign to save Area C, it is inconceivable that its right-hand does not know what its left is doing – and yet these phenomena only grow ever more rampant.” 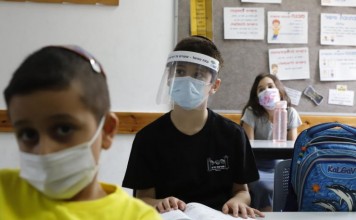