European Union foreign policy chief Federica Mogherini and the heads of Britain, France and Germany issued a warning to Iran this week, urging Tehran to comply with the terms of the JCPOA nuclear deal or face the return of sanctions instead.

Last week Iran took a fifth step of non-compliance with the Joint Comprehensive Plan of Action (JCPOA) nuclear deal signed by Iran with world powers in 2015 — this time resuming uranium enrichment at its underground Fordow nuclear plant, which is completely banned under the deal.

The first violation of the nuclear deal came when the United Nations International Atomic Energy Agency officially confirmed a claim by Iran that it had amassed a stockpile of more than 300 kilograms of uranium enriched to 3.67 percent.

Tehran had made the statement in the final week of June 2019, saying it had deliberately crossed the limit in retaliation for the new sanctions imposed on the regime by the United States.

Iran announced the second violation of the nuclear deal in July 2019, when officials told reporters that uranium enrichment levels had been increased beyond the 3.67 percent limit set forth in the JCPOA.

In response, Israeli Prime Minister Benjamin Netanyahu called on world leaders to take action after hearing Tehran confirm it would increase its enrichment of uranium. “I’m asking you not to provoke, but out of joint knowledge of history and what happens when aggressive totalitarian regimes can cross the threshold toward things that are very dangerous to us all. Take the steps that you promised. Enact the sanctions,” Netanyahu urged. But he was ignored.

The third violation came about two months later, with Iran activating a number of advanced centrifuges and expanding its research and development work beyond the limits set in the JCPOA nuclear deal.

Evidence that Iran Violated the Nuclear Deal Since Day One?

Iran’s Atomic Energy Organization activated 20 IR-4 and 20 IR-6 centrifuges, in addition to lifting the limitations on its nuclear Research and Development program, which will “include the development of more rapid and advanced centrifuges,” said Iranian nuclear agency spokesperson Behrouz Kamalvandi.

The fourth violation, unsurprisingly, came in November 2019, with Iran’s breach of the limit set on the production and storage of heavy water, which is used to slow down reactions in the cores of nuclear reactors. The cap set in the JCPOA was 130 tonnes.

“On 16 November 2019, Iran informed the Agency that its stock of heavy water had exceeded 130 metric tonnes,” the IAEA said in a report obtained by the Reuters news agency. “On 17 November 2019, the Agency verified that the Heavy Water Production Plant (HWPP) was in operation and that Iran’s stock of heavy water was 131.5 metric tonnes,” the report said.

This week, Iranian Foreign Minister Javad Zarif tweeted a message to the European signatories:
“To my EU/E3 Colleagues: 1. ‘Fully upheld commitments under JCPOA’ YOU? Really? Just show ONE that you’ve upheld in the last 18 months. 2. Iran triggered-& exhausted-dispute resolution mechanism while you were procrastinating. We’re now using para36 remedies.”

The Islamic Republic contends that in paragraph 36 of the JCPOA, Iran is allowed to reduce its commitments if other signatories are not in compliance. The European signatories dispute the point. Iran, meanwhile, warns that snapping back the sanctions will be the “red line” that will cause the deal to entirely collapse.

Some would say that process is already galloping along: on Monday, the UN International Atomic Energy Agency (IAEA) reported that Iran is rapidly accelerating its uranium enrichment, even as it steps up enrichment at the Fordow site.

Moreover, Iran has given notice that it intends to further exceed the agreed-upon limitations of the JCPOA if the E3 (Britain, France and Germany) do not shield its economy from the effects of US sanctions.

But Iran never intended to keep the deal in the first place, and there is more than adequate evidence that in fact, Iran was violating the JCPOA from the very first day it was signed.

The documentation is revealed in a report published by the Institute for Science and International Security, and the Foundation for Defense of Democracies, and in a presentation by Israel’s Prime Minister Benjamin Netanyahu on April 30, 2018.

In that presentation, Netanyahu revealed new and conclusive proof of the secret nuclear weapons program that Iran had been hiding for years from the international community in its secret atomic archive.

Left with no choice, the International Atomic Energy Agency subsequently went to inspect the sites identified by Israel – and found traces of the radioactivity that remained, despite the best efforts of the Iranian government to erase the evidence.

The clear violation of the JCPOA, red-flagged to the IAEA by the Mossad, had not been made public, nor had it been shared during a quarterly meeting of the UN agency’s Board of Governors.

But the IAEA could not ignore it, either; Israel made sure of that by disseminating copies of the files and documents it captured to relevant governments as well.

World powers can no longer plead ignorance of what Iran is doing. Whether they choose to take action to stop it and keep the world safe, is up to their leaders. 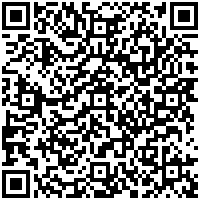