Priti Patel, Secretary of State for the Home Department and Member of Parliament, on Sunday demanded “full explanation” from Twitter and Instagram as to why the anti-Semitic posts of Richard Kylea Cowie Jr., a.k.a. rapper Wiley, were not removed more quickly.

“The anti-Semitic posts from Wiley are abhorrent,” Patel twitted. “They should not have been able to remain on Twitter and Instagram for so long and I have asked them for a full explanation. Social media companies must act much faster to remove such appalling hatred from their platforms.”

On July 24, Wiley posted a string of anti-Semitic tweets that described Jewish people as “cowards” and “snakes,” and compared the Jews to the Ku Klux Klan.

The Campaign Against anti-Semitism said it had reported Wiley to the London Metropolitan Police and issued a statement saying: “We consider that Wiley has committed the offense of incitement to racial hatred, which can carry a substantial prison sentence.”

Wiley’s Twitter and Instagram accounts have a total of 940,000 followers. The CAA called for both his accounts to be removed.

Mayor of London Sadiq Khan sent a letter to Twitter and Instagram saying that when the material was published on their platforms, “the response – its removal and the banning of those responsible – should be immediate. It takes minutes for content shared on your platform to reach an audience of millions. When someone influential shares hate speech, in that time it may have an impact on the views of many who look up to them.”

Mayor Khan said it was “particularly disheartening” in light of the fact that the same social media outlets had recently played a “positive role in amplifying the vital voices” of the Black Lives Matter movement.

Wiley’s posts began on Friday night. By Saturday, his manager of 12 years, John Woolf, dumped him.

Former Conservative MP Louise Mensch twitted that TwitterUK had only removed some of the Jew-hating rapper’s tweets, and shared some of the choice ones which are still available online: 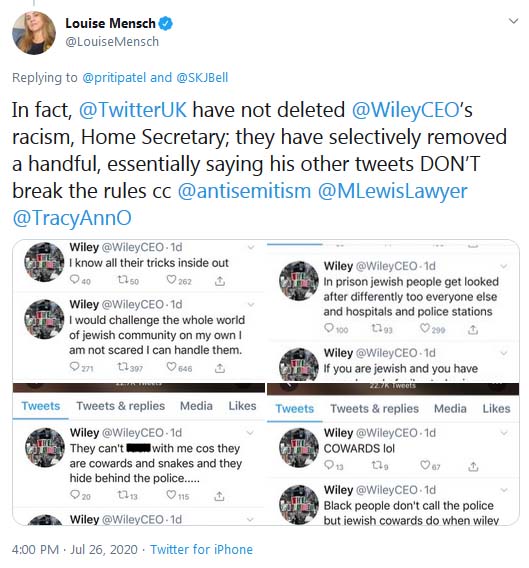 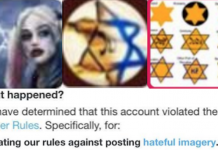 Twitter Unlocks Accounts with Stars of David, Won’t Say Why They Were Blocked in the First Place 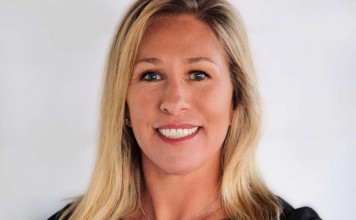 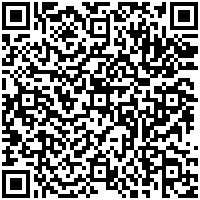