An indictment was filed on Monday at Haifa District Court against Habib Abu Habib, 41, a resident of Akko, for the terrorist act of attempted murder after being an accomplice in the lynching of Mordechai Katz in the city during the riots of Operation Guardians of the Wall last month.

On May 13, one day after he had been brutally attacked by a crowd of young Arabs in Akko, Katz stood in front of the cameras and talked about the lynching of himself and of Elad Barzilai, who was seriously injured.

Katz said he arrived at the scene to “demonstrate a Jewish presence,” but the atmosphere heated up fast and things went wrong. “I said that with all due respect to all this, I’m going home,” he recalled, and continued, “I started going back, the street was dark. I started walking at a moderate pace. Suddenly I hear something … I hear something happening, I like, stop, I try to figure out what’s going on. I see someone in front of me running shirtless. In a split second, I realized it was not a Jew and I stopped, I just froze, and then … It was like being slapped twice, from the front and the back, and I crashed face-first on the pavement. I was hit with a stone in the front a boulder in the back and I crashed on the road like a sack of potatoes,” Katz said.

Katz defined his feelings, apart from the physical pain, as humiliation. A religious man, he explained, “We don’t resent anything, we are happy and accept everything with love, but I feel that on that evening a very painful zit was ripped. We often try to get on with it and you know, apply all kinds of Band-Aids. But these events leave a mark, and something here needs a real solution,” Katz said.

According to the indictment, Abu Habib threw a stone at Katz’s head from a distance of six feet, while another person, who has not yet been caught, threw another stone at him. Katz fell to the ground and then the defendant threw yet another stone at him. At the same time, six Arab rioters beat him with stones and sticks and kicked him in all the parts of his body. He was finally rescued by Jewish civilians and a police officer who fired his weapon in the air to repel the assailants. 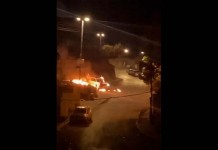 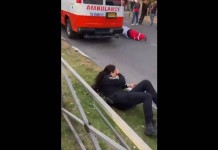 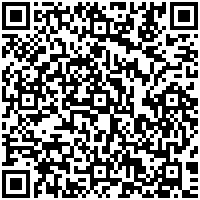