Economy Minister Eli Cohen (Kulanu) on Wednesday morning toured Bedouin squatters’ illegal shantytown Khan al-Ahmar, accompanied by members of the Regavim movement which makes it its business to follow up on Arab violations of the legal status quo in Judea and Samaria. Cohen, whose party, led by Finance Minister Moshe Kahlon, is on the precipice of the threshold vote and could disappear from Israeli politics, abandoned his chairman’s pro-2 state politics, and suggested Khan al-Ahmar should be evacuated before April’s elections.

The Regavim folks offered Minister Cohen a legal and geographical review of the illegal construction activity carried out by the Palestinian Authority in Khan al-Ahmar and elsewhere.


“Only yesterday, the head of the Shin Bet revealed the existence of a foreign state that tries to intervene in an improper and dangerous manner in the upcoming election campaign,” said Yishai Hamo, director of Regavim’s activities in the Judea and Samaria area, “But [no one seems concerned about] the involvement of foreign countries operating in Israel and undermining the rule of law, through extensive illegal construction and hundreds of millions of euros in assistance to the Palestinian Authority, which is taking over strategic parts of Judea and Samaria, chief among them the Maale Adumim region.”

Minister Cohen said during the tour, “I arrived this morning to see the Khan al-Ahmar outpost, which the High Court of Justice determined should be evacuated.”

“In the State of Israel there is justice and the law must be respected,” he continued. “And therefore, the Khan al-Ahmar outpost should be evacuated before the elections. But even more important, we must deny the Palestinian Authority territorial contiguity, by coming and annexing, and applying [Israeli] sovereignty over Area C,” Cohen added. 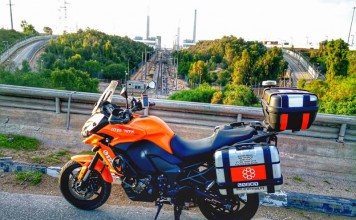