The funeral of Shireen Abu Akleh, a senior journalist and one of the icons of the Qatari Al-Jazeera network, was a show of forces by the Fatah movement in eastern Jerusalem, and the pallbearers were convicted terrorists, TPS has learned.

Abu Akleh was killed during an encounter between IDF forces and terrorists in the Jenin Refugee Camp last Wednesday, and her funeral turned into a demonstration, with mourners waving PLO flags and chanting anti-Israel slogans. The police’s clashes with the procession generated expressions of shock around the world.


However, conversations with Fatah activists and testimonies gathered by TPS, as well as information provided by Im Tirzu’s Arabic desk, indicate that the organization, headed by Mahmoud Abbas, came prepared for the event.

Quite a few Fatah officials competed for the carrying of Abu Akleh’s coffin, and a few were “honored to carry the coffin on their shoulders,” as some of them said in interviews with the media.

Rajay Haddad was honored to carry Abu Akleh’s coffin. His picture in a gray shirt was circulated on social media, and when it was doubted whether it was him or another activist, he posted the “original” picture on his Facebook page and announced that he had carried the coffin.

Haddad is one of Fatah’s senior figures in eastern Jerusalem, a terrorist who spent 20 years in Israeli prisons after participating in the 1998 murder of Gabriel Hirschberg in Jerusalem’s Old City and serving as an assistant to the terrorist Ayman Sharbati, also a Fatah activist.

Haddad, 43, has been banned from the Temple Mount several times by the Israel Police since his release from prison in 2018, a well-known figure in the Israeli intelligence services and one of Adnan Ghaith’s men, the Palestinian Authority’s “governor” of Jerusalem.

Haddad is also active in the Palestinian Prisoners’ Club, which is headed by Naser Kos, who was in charge of Abu Akleh’s funeral arrangements and was in touch with the Muqata’a in Ramallah. Sources say that Kos was the one who championed the funeral’s belligerent atmosphere and opposed the Jerusalem police directives, which demanded that no flags be flown during the funeral. Reports also indicate that he was not well received by the Abu Akleh family.

Haddad is also a guard at the Al-Aqsa Mosque plaza and has been photographed several times while wearing the Jordanian Waqf guard emblem on his garments.

Alongside Haddad, Omar Abu Khdeir was also one of Abu Akleh’s pallbearers. Abu Khdeir, 34, a resident of Shu’afat in Jerusalem, is also one of the Fatah operatives in eastern Jerusalem and a released prisoner. He is also a relative of Muhammad Abu Khdeir, who was murdered by Jews in the summer of 2014.

Abu Khdeir insisted on proving his contribution to the funeral procession, and so he has since been interviewed by dozens of local media outlets and recounted how “his hands were torn from the beatings he received from the police, but still, out of a promise to carry the coffin, he did not give up.”

Abu Khdeir is known in eastern Jerusalem as one of the main Fatah operatives in demonstrations around al-Aqsa and the riots at the Damascus Gate. He was arrested by Jerusalem’s police on Monday night.

Mahmoud Fatiha is not a senior Fatah figure in eastern Jerusalem, because he spent several years in Jordan and was one of the heads of Palestinian students at the College of Engineering. Fatiha, a resident of Ras al-Amud in Jerusalem, was nevertheless among the bearers of the coffin for a short time, until he was arrested by the police and taken for questioning.

Kos, 51, the organizer of the funeral procession, grew under the tutelage of Faisal Al-Husseini during the first intifada. Abu Akleh’s funeral was the second largest in eastern Jerusalem since 1967, second only to Husseini’s funeral.

Kos is also considered one of the Jerusalem police’s intelligence targets and as such has repeatedly been removed from the Al-Aqsa Mosque and the city in general, also due to him being one of Fatah’s mainstays in stormy demonstrations in the city in recent years.

Protest activists from Europe were also present at the Jaffa Gate during the funeral. The World Council of Churches (WCC) “ecumenical accompaniers” were documented at the funeral.

The activists were seen wearing the vests of the Ecumenical Accompaniment Programme in Palestine and Israel (EAPPI), operatives sent to Israel to “monitor” and “report human rights abuses,” the flagship program of the World Council of Churches.

EAPPI has come under fire from an array of pro-Israel groups who have shed light on the EAPPI’s anti-Israel activities, noting that the accompaniers violate the conditions of their tourist visas by harassing IDF soldiers and Israeli residents, and upon their return home, engage in anti-Israel advocacy including promoting BDS boycotts and smearing Israel as an apartheid state. 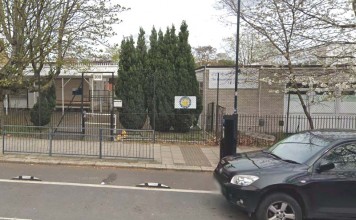