The requirement is one that is a precaution only, taken in light of the escalating global COVID-19 epidemic that is continuing to spread in the wake of the tens of thousands who have become ill with the Wuhan coronavirus, as it became known initially, in China.


The rabbi is visiting Singapore to supervise the opening of the new Jewish cemetery there; he is expected to return to Israel later this week.

Singapore is on the list of nations named by Israel’s Health Ministry as high-risk locations from which travelers must enter a 14-day mandatory quarantine upon their return to the Jewish State.

When the former Sephardic Chief Rabbi of Israel returns to the country, he will be required to maintain a self-quarantine at his home for 14 days — the length of time it takes to determine whether he has caught the virus or not.

Israel’s Health Ministry recently expanded its mandatory quarantine regulations to travelers returning from Thailand, Hong Kong, Singapore and Macau, in addition to those arriving from China.

In Taiwan, a man with no known history of traveling to mainland China has died of the coronavirus; the patient had an underlying medical history of diabetes and hepatitis B.

The total number of confirmed cases of the virus on the Diamond Princess cruise ship docked at Yokohama Port has risen to 355; when the ship began its quarantine there were more than 3,700 passengers and crew aboard the vessel.

Three Israeli passengers have become infected with the virus; an Israeli physician is on his way to Japan to accompany them through the treatment at the American hospital about an hour away from the ship. The other 12 Israeli passengers who remain on the vessel are hoping to be evacuated by the Israeli government and are staying in their cabins as much as possible, even rejecting offers to go out for “fresh air” an hour a day, due to concerns they might catch the illness.

More than 68,500 people have been infected, and at least 1,669 people have died worldwide, officials have said. Most have been in in the Hubei Province of China, the epicenter of the outbreak. 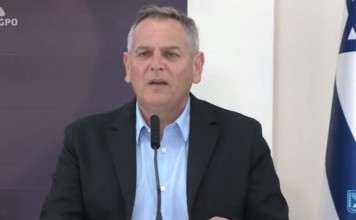