To start, this entire report is based on a literal interpretation of a statement that was made on Thursday by United Torah Judaism Chairman MK Moshe Gafni at the Muni Expo in Tel Aviv. He meant it metaphorically, but the way so many great human inventions come to life unintentionally, Gafni may have come up with the ultimate way to change forever the rift between Haredi and secular Israelis over the military draft, a.k.a. the “equal share of the burden.”

Here’s what he said: “In a Jewish state, it’s not possible that there won’t be a regiment of Torah scholars, there’s no such reality.”

What he meant was that the armies of Yeshiva students are just as critical to the welfare of the state as are the armies of soldiers. But by borrowing the term “regiment” (Chail in Hebrew, which also means corps), he opened up a magnificent possibility:

Let the IDF add to its Infantry, Armored corps, Navy, and Air Force a Torah Corps. Top Haredi Rabbis will be recruited as Torah officers, to command Haredi recruits who will undergo “gibbush” (pre-service tests for elite units) and, later, basic training and specialized courses, just like combat recruits, but their battlefield will be Torah learning.

Dressed in their spit-shining uniforms, these Torah soldiers will show up at six in the morning for inspection, then daven Shacharit (Special Forces will get up earlier and daven Vesikin), eat a very kosher breakfast, and by eight be seated in their study barracks for chavrusa learning and shiurim. The material will be organized and regulated militarily, and study time strictly supervised. No sneaking out for coffee or missing a shift to go work off the books for a nearby business. There will be no nearby businesses, only a military camp where the only business is learning, from 8 AM to 8 PM, with a break for lunch and Mincha.

Like all recruits, Torah soldiers will only go home every other Shabbat, and since they’ll be enlisted at age 18, most of them won’t have wives and children to take care of. They’ll also serve guard shifts, and to that end will undergo elementary training in handling a weapon.

They will also be required to produce works attesting to their scholarly achievements. And if they don’t perform as expected, they could lose their Torah soldier status and become just soldiers.

Torah soldiers will earn the same as any other IDF recruit, NIS 2,463 ($720.26) per month. The money is already there: the finance ministry will divert it to the army from the budget for yeshivas. This should present a great relief to the Israeli economy.

When they are discharged, Torah soldiers will enjoy all the benefits that are bestowed on regular veterans, including the right to public housing at a reduced rate. But they will also have to serve between two weeks and a month every year in “miluim,” the reserves, like every other veteran.

At the Muni Expo, Gafni also said: There was the kingdom of the house of David where there were bloody wars. So, the prophet came to King David and told him that he was the chief of staff. He told him – half of the people are studying Torah and half of the people serve in the army and they alternate.”

Agreed, MK Gafni, agreed! Let all of Israel’s Jewish 18-year-olds don the IDF uniform and endure the same conditions, for real, one-half doing combat, the others “killing themselves under Torah’s tent,” as the Haredim have been describing their grueling studies all these years.

I’m not sure which source Gafni relied on when he described the dialogue between a prophet and King David. But I am familiar with tractate Sanhedrin 49a:

I know all MK Moshe Gafni meant to tell his audience was, essentially, “Leave us alone, what we’re doing is just as important as what you’re doing, if not more.” But by referencing King David, our ultimate example of a messianic king who is both a scholar and a warrior, the UTJ chairman opened the door to a liberating future of real, equal cooperation between Haredim and all the other Israeli Jews. 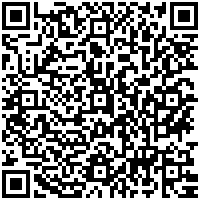