Former director-general, secretary-general and spokesman and currently member of the board of directors of Peace Now, Yariv Oppenheimer, on Wednesday was married in an Orthodox ceremony officiated by a rabbi affiliated with Tzohar, a nationally renowned religious-Zionist group dedicated to providing Orthodox Jewish services that are warm and welcoming to secular Jewish people.

Under the Chupah, before reciting the traditional text from Psalm 137, “If I forget thee, O Jerusalem, let my right hand forget her cunning, if I do not remember thee, let my tongue cleave to the roof of my mouth; if I prefer not Jerusalem above my chief joy,” Oppenheimer stressed that in reciting the two verses he does not include the neighborhoods of eastern Jerusalem which he believes should become the capital of a future Palestinian state.

Oppenheimer’s activities in Peace Now include advocating for a Palestinian state, freezing construction in the Jewish settlements and the evacuation of the outposts, and appearing in numerous televised public confrontations with Israeli rightwingers.

In addition to his Peace Now gig, Oppenheimer was elected to the Labor Party convention and ran in the 2013 primaries for a spot on the Zionist Camp Knesset slate. He received about 8,000 votes and was placed in the 27th spot on the party list. The party received 15 seats. 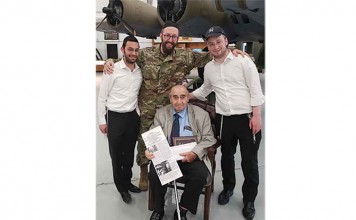 Rabbi Levi Welton: On A Wing And A Prayer