“[Bennett and Shaked] used the party as a platform for eight years and then abandoned it without preparation and left behind an atomic mess,” MK Bezalel Smotrich told Israel Hayom on Wednesday.

A few weeks ago, shortly after Naftali Bennett and Ayelet Shaked had announced their departure from Habayit Hayehudi and the creation of their New Right party, Smotrich responded with extreme kindness, considering the two had been Habayit Hayehudi’s top leaders. He stated: “I wish Ministers Bennett and Shaked great success in their new path and hope that this step will strengthen the right-wing bloc.”

But then the same Smotrich was being attacked viciously by his own rank and file, especially after it had turned out that he and several power brokers in the religious Zionist camp collaborated in the scheme to split Habayit Hayehudi into light- and classic-religious.

And so, having just been elected leader of the faction that stayed home, defeating his more senior colleague, Agriculture Minister Uri Ariel, Smotrich gave Israel Hayom a blazing attack on his two former colleagues, as part of a full-length interview to be published this weekend.

On Wednesday, the newspaper offered this teaser:

“‘They abandoned the religious Zionist party at the last-minute, and now in Habayit Hayehudi there is a war of everyone against everyone else, its all empty, and void, and waste.'”

which is closely translated as the city of Nineveh being “empty, and void, and waste; and the hearts melt, and the knees buckle, and convulsion is in all loins, and the faces of them all have gathered blackness.”

OK, that’s way too harsh a description for a pre-election crisis, but, hey, it’s only January…

Smotrich continued: “They used the party as a platform for eight years and then abandoned it without preparation and left behind an atomic mess. I’m not saying it’s bad that we part. But there is a way to say goodbye.” 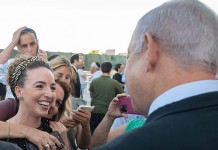